‘Pirates of Penzance’ a treasure for HHS drama

Students to perform Gilbert and Sullivan play this month 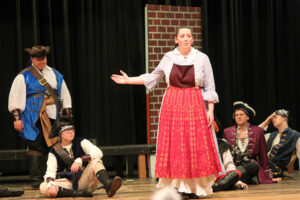 Senior Rebecca Gallant runs through a scene during a rehearsal for “Pirates of Penzance.”

The Hopkinton High School Drama Guild will be bringing a classic Gilbert and Sullivan musical to life as it presents “The Pirates of Penzance” on Nov. 21-24.

The operetta is the story of Frederic, who, after turning 21 years old, is released from his apprenticeship to a band of tender-hearted pirates. After a set of circumstances get in the way of his plans, hilarity ensues.

“There is a lot of silliness and energy on stage and some pretty awesome music,” said Rebecca Gallant, a senior who will be playing Ruth in the show.

Owen Keefe, a sophomore who is playing the Pirate King, agreed that this year’s pick for musical will be a fun-filled show.

“There is a lot of passion. There is humor mixed with vocal and acting talent,” he said. “The audience will be in for a pleasant surprise.” 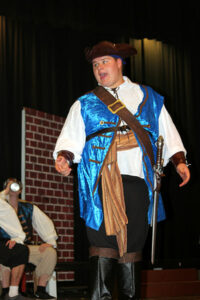 Junior Dylan Morin belts out a tune during a dress rehearsal.

Close to 40 cast and 20 crew members have been hard at work since the beginning of September preparing to launch the fall musical. The students have been assisted by costume director Clorinda Kirshy, musical director Isaac Brody, band director Craig Hay and the production’s director, Valerie von Rosenvinge, who said that she chose “The Pirates of Penzance” as a chance to introduce the students to a different type of musical theater.

“Most of them had never even heard of Gilbert and Sullivan. That’s when I knew it was a good pick,” von Rosenvinge said with a laugh.

Von Rosenvinge said that the jokes and music will resonate with the audience, both young and old, even though it takes place in the 1800s.

The director credited the students for making a huge investment in this year’s production, one that the audience will feel from the moment the curtain is raised.

“I think people will walk away saying they couldn’t believe that was a bunch of high school students putting on that show,” she said.

A drama teacher at Hopkinton High School for the past 18 years, von Rosenvinge said it was a privilege to give students a chance “to explore and create in a safe environment.”

“Students join the drama program and on day one they feel like they have found their home,” she said. “They have complete ownership of the final product and are so proud of their accomplishments.”

The HHS Drama Guild production of “The Pirates of Penzance” will be performed on Thursday, Nov. 21, at 4 p.m.; Friday, Nov. 22, and Saturday, Nov. 23, at 7 p.m.; and Sunday, Nov. 24, at 3 p.m. The performance will be held at the Hopkinton Middle School auditorium. Tickets can be purchased at the door: $15 for adults and $10 for students/seniors. Seniors who are Hopkinton residents (and show ID) receive free admission.