Following speeches by both candidates and some questions for each, members of the two boards voted to select Shahidul Mannan over Curtis Smithson by a 7-5 count. Mannan then was unanimously approved.

Mannan has served as a member of the Growth Study Committee and Appropriation Committee and has been an engineer for the past 25 years. He stressed “building a more value-revenue stream for the town.”

Smithson, who has served on the Zoning Advisory Committee and the Permanent Building Committee since last year and has a 30-year planning and zoning background, said one of his concerns was protecting the town’s green space.

Developer Lou Petrozzi updated the board on the subdivision plan on Leonard Street. This resulted in a lengthy discussion about the existence of a formerly abandoned road marked on the plan, as well as a small lot that was unmarked.

Initially there was a question about a small lot on the left-hand side of the plan not having been designated with a unique lot number. Gelcich said that the board could approve it with the condition that the lot number be updated.

Chair Gary Trendel noted that the plan referenced Bucklin Street, which is a non-existent paper road. Petrozzi explained that the engineer had to record the name and there will be a release of any rights to Bucklin Street. He noted that it was never a public road but was an abandoned private way. 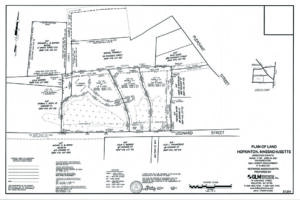 Gelcich asked if the request to discontinue the road would be brought forth at Town Meeting, but Petrozzi said this was not a necessary step, as the road was not public in the first place.

“There’s nothing to discontinue with result of a town action,” Petrozzi said, noting the town had voted to discontinue Bucklin Street in 1998, even though it had not been constructed.

Gelcich said the plan would be “cleaner” if the plan designation “formerly Bucklin Street” was removed.

Petrozzi said he would need to consult with the engineer in case this action is precluded.

Trendel recommended that the plan be approved with the understanding that the two conditions be met. Petrozzi was amenable if the engineer agrees.

Gelcich explained that this could not be done, because he would have to be directed to make the changes. He said the application should be withdrawn and a modified plan be submitted.

“Just to make everything clean, you don’t want me to hand write the changes in,” he said. Gelcich noted that, if the board directed him to strike the language, it could be voted upon without the engineer’s approval. However, if a new plan is presented with the engineer’s modifications after the approval, it would not be proper because it would not reflect what the Planning Board approved.

After a lengthy discussion, the plan was withdrawn by Petrozzi, and the hearing was continued until the next meeting on July 26. The vote to withdraw without prejudice was approved 7-0.

The Planning Board had an hour-long discussion of modifications to the Connelly Farms subdivision at the corner of Hayden Rowe Street and College Street, and the hearing was continued until Aug. 9 after a lengthy review. The decision would need to be extended until Aug. 16 for the Open Space and Landscape Preservation Development (OSLPD).

At the last meeting, the hearing was continued with a 5-0 vote because town engineering consultant BETA Group submitted a letter dated June 18 with some modifications to the project on the day of the meeting. However, the hearing, chaired by member Fran DeYoung, discussed modifications based on information received on June 10 with the understanding that the June 18 modifications requested would be discussed at this meeting. The deciding date also had been extended to July 22 at that time, but that was pushed out at this meeting.

Land surveyor Joe Marquedant, representing the applicant, said he had not seen the landscape plan revision, but that during construction an effort would be made to “preserve as many trees as possible.” While he did not have a number for trees to be saved, he did say that the grading could be adjusted.

Developer Ron Nation, the applicant, said that a stone wall using native stones would be constructed at the entrance, and shrubbery would be added.

“We just want to do something neat and clean and attractive,” he said.

There also would be pollinators and shrubbery around the different catch basins on the site. The trees were doubled on the side of the road into the property.

A condition was going to be added to do more soil testing at the rear basin because of the poor soil quality at the time of construction. A larger machine would be needed to perform the testing, which would be problematic before the land is cleared.

However, Phil Paradis from BETA was afraid of setting a precedent of approving it without all of the data.

“We’ll march out there and drill some more holes,” Nation said.

The trail proposed provides a “unique opportunity” to connect to a trail system in Milford, according to Marquedant. After some discussion, it was decided that the Trails Coordination and Management Committee (TCMC) would provide the trail maintenance rather than the homeowners.

Paradis also spoke about the need for a roof runoff infiltration system for each of the lots, which he described as a “typical practice.” He said that the retention basins would “eventually fail.” Nation said he would investigate this, but that was not his personal experience.

In a brief hearing chaired by vice chair Mary Larson-Marlowe, the Chamberlain-Whelan subdivision project’s amended plan was approved by a 6-0 vote. The town’s principal planner, John Gelcich, announced that the modifications requested for the project were made and reviewed by the town’s engineering consultant, BETA Group, and met with its approval.

The board’s next meeting on July 26 will have a packed agenda. The Equestrian Realty Trust project off Ash Street and Chestnut Street — introduced as a five-lot subdivision but acknowledged to actually be a planned solar development — will be heard.

Also, the issue of the alleged disturbance of Indigenous artifacts on the Wilson Street solar project will be discussed with the developer, Grasshopper Energy, and members of the Narragansett Indian Tribal Historic Preservation Office.