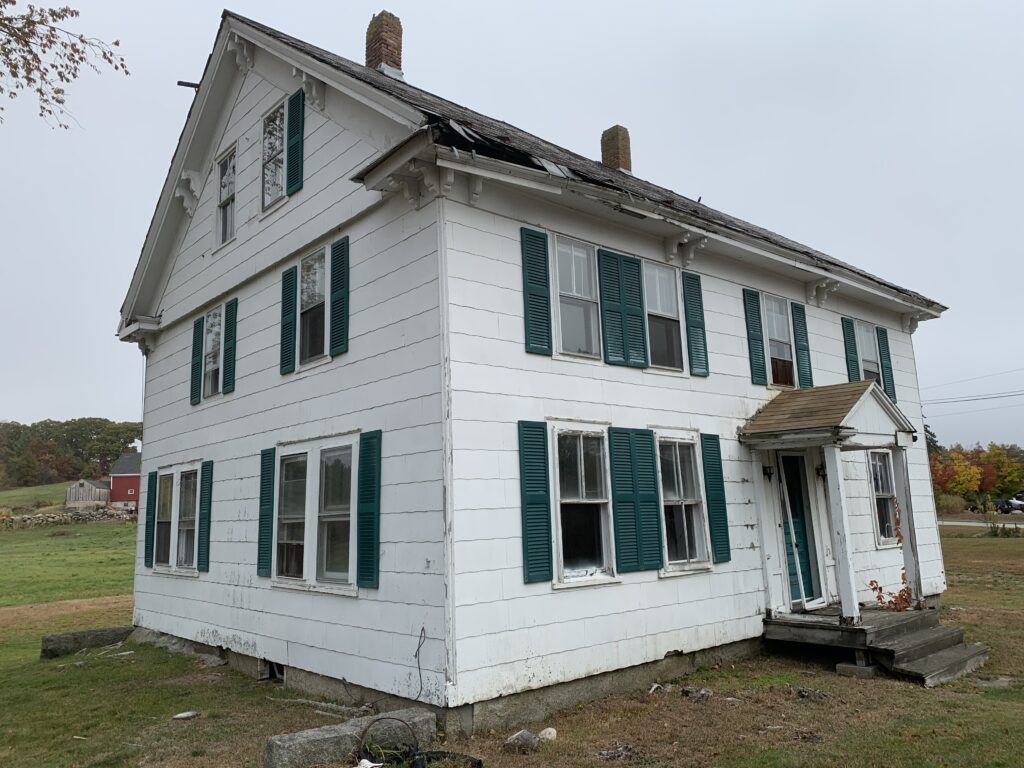 The house at 83 Main Street dates back to about 1875. FILE PHOTO/JERRY SPAR

The Planning Board at its meeting Monday night unanimously approved an open space mixed use development (OSMUD) at 83 East Main Street after discussing concerns that the three proposed age-restricted housing units would clash with the historic single-family house that will be replicated on the site.

Chair Gary Trendel and developer Roy MacDowell, who represented Legacy Farms during the presentation of the site plan, both reminded the board that the three units are allowed by right. While the visual aspect of the condos next to a historic home and the proximity of the restored house to the street may not be as appealing as some members would appreciate, Trendel said the board is solely charged with reviewing the planning criteria of the project.

“Our job is to review the proposal against these decision criteria,” Trendel said. “I do think it’s important to note that even though we might not like the way it looks, and even though there might be something that would be a lot nicer or better there … that’s not our job to assess that.”

The site, part of the Village Center zoning subdistrict, is a small triangular plot at the corner of East Main Street and Legacy Farms Roads North, just west of Weston Nurseries. The proposal for three condominiums was presented by Chubb Road LLC.

Since the proposal was presented last month, MacDowell said he has made modifications. They include adding screening trees on the street side of the project to soften its look as well as birch trees in front of the condos. The new color scheme, he added, should be more in keeping with the neighborhood’s character.

MacDowell noted that he has been working with the Historical Commission as well as the Zoning Board of Appeals (ZBA). The only condition was that the shutters not be included in the new design. He said the home is in such a state of deterioration that restoring it would not make sense.

Explained MacDowell: “The only thing in that house that is original is the interior frame, and the sills right now are all rotted.”

Phil Paradis, the town’s consultant from BETA Group, approved of the plan changes. They included a revised lighting plan and the redesign of a swale that would direct water toward the intersection of East Main Street and Legacy Farms Road North.

Resident Bob Foster expressed concerns about the infiltration basins and how the poor soil quality would affect stormwater management.

Paradis said the existing drainage system flows to that intersection, but it misses the catch basin west of the intersection. He said this would only be a concern in a major storm, but the infiltration system is adequate.

Foster stressed that his major issue was “overloading this sliver of land” with four housing units, which he thought would cause a traffic problem.

Paradis said only about 10 traffic trips per day would be impacted by the housing there.

MacDowell explained that while the replicated house is 5 feet from the property line, it is actually 20 feet from the street. The Historical Commission wanted the house to remain in that location to “have a presence when you come from either direction so it’s the first thing you see.” The driveway in question has always been there, and he did not foresee any traffic problems, especially because there is a traffic light at the intersection.

He added that options other than the housing, including commercial developments, would be allowed on the site.

“This is one that I struggle with a lot,” Trendel added, noting that he agreed with some of Foster’s comments. “But it is an allowable use.”

“I personally think that it’s really unfortunate that this new structure that’s being proposed does not really fit in with the historic nature of the structure,” he continued. “But that being said, it doesn’t need to be.”

MacDowell replied that he has spent the past five years entertaining different options for the site. He said the proposed housing was more in keeping with the neighborhood’s character than potential commercial development or a restaurant.

“A lot of them we just thought you’d be horrified if we brought them in front of you,” he said. “To plunk a Dunkin’ Donuts right next to that house in a residential neighborhood — you would have been horrified. But at the same time, it had a right to be there.”

MacDowell added that while he did “empathize and probably agree” with people who would have liked to have seen the historic home moved further back from the road, keeping it there “is something we’re being told to do.”

The board granted a special permit extension for a solar project off Wood Street that was originally approved in 2019 but now is under control of New Leaf, a solar energy contractor. It previously had been extended for a year when it was proposed by Borrego.

Brandon Smith of New Leaf Energy explained that New Leaf “is a spinoff of Borrego” but is considered a separate entity. The same team is involved with the project.

The reason for the extension request, he said, was that the electrical design had to be reconfigured, and it was finalized this summer. Construction could not move forward until this approval, which caused the delay. There are no changes to the permit itself, Smith said.

“There’s fewer electrical requirements to connect to the grid,” he said of the electrical design. The amount of energy being transferred is being lowered from five megawatts to one, while the amount being stored in the battery remains the same.

In other news, the Planning Board unanimously approved the reappointment of current Zoning Advisory Committee (ZAC) members Curtis Smithson, the current chair, and Rachel Rossin to new terms.

Smithson also was appointed as a new member of the Design Review Board for a one-year term, filling an open seat.