At its meeting last Wednesday, the Planning Board unanimously approved an open space and landscape preservation development (OSLPD) special permit for a proposed nine-lot development on Hayden Rowe Street just north of the intersection with College Street.

The applicant, developer Ron Nation, was granted a waiver for the 100-foot buffer zone, as the proposed access road encroaches within 20 feet of the corner of an abutter’s property. The abutter, Wayne Eddy, was amenable to the plan after receiving assurances that there would be adequate screening. Eddy’s house is toward the opposite end of the property.

Some Planning Board members questioned whether the 20-foot zone was adequate.

“It’s not just this plan, it’s any plan coming forward,” Muriel Kramer said. “The buffers are there for a reason, and the wetland protection guidelines are there for reasons. I really feel like we need to really contemplate respecting the buffer zone to a neighboring residential property owner.”

Eventually the waiver passed 6-1, although the developer agreed to add about 10 feet of buffer zone. The board also included an explanation that there would be extra screening and the single affected abutter was amenable to it. Additionally, it has less impact on open space and existing wetlands. 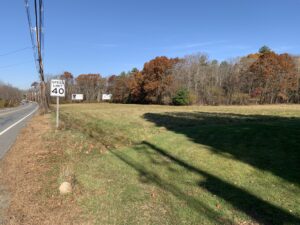 This open field on Hayden Rowe Street is where a developer would like to construct an access road for a nine-home development. PHOTO/JERRY SPAR

Among the conditions for approval of the permit were that the applicant provide a single wetland crossing, provide additional screening for the Eddy property, provide adequate and appropriate screening around the stormwater basin, and remove the existing billboards on the site.

Mary Jane Connelly, who owns the property with her sisters, said the lease for the billboards would be terminated upon the completed sale of the land to the developer.

Board member Deb Fein-Brug suggested checking with the Historic Commission first, expressing the possibility that the billboards could be considered historic structures.

“I’m all for taking them down if they’re not historic, but if they’re historic I think they should be preserved,” she said.

Countered Rob Benson: “Having lived in town for over 35 years, they’ve looked very much the same that whole time, just different advertisements. I would not think the vast majority of the town would consider them an attractive landmark. That would be my opinion.”