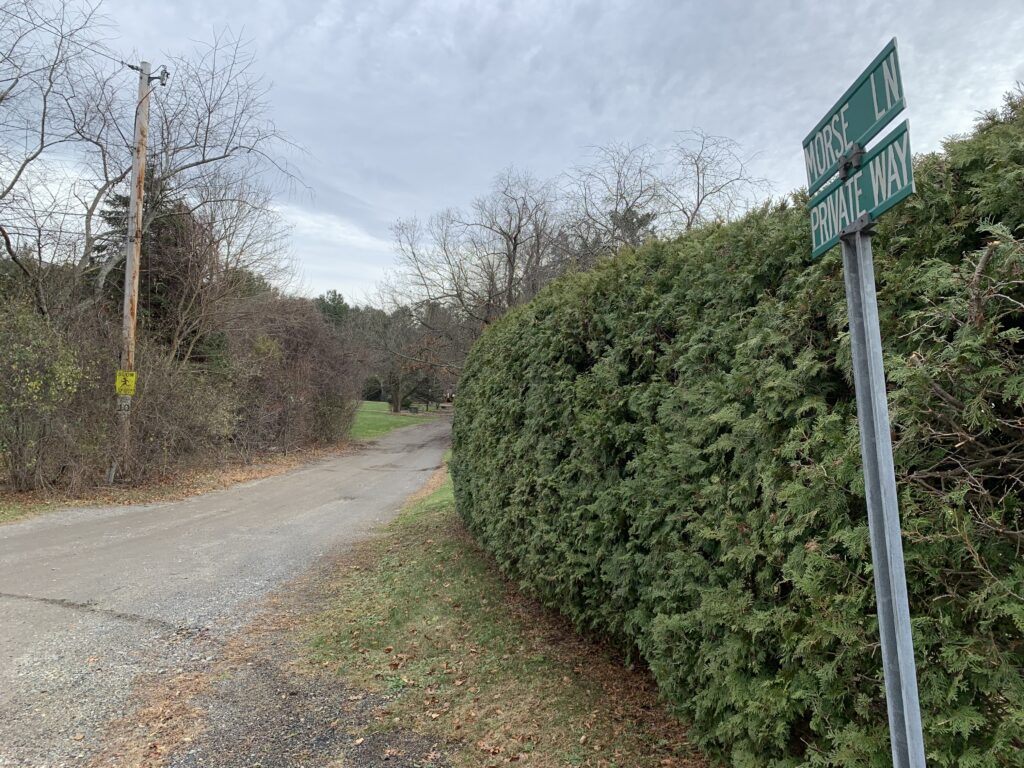 A property owner who seeks to subdivide a lot on Morse Lane plans to improve the quality of the private road. PHOTO/JERRY SPAR

The Planning Board at its meeting Monday night voted to continue the hearing on the Capobianco family subdivision on Morse Lane after nearly an hour of discussion to allow Principal Planner John Gelcich time to draft clearer language on the findings and conditions regarding the property for a vote at the next meeting on Dec. 19.

The applicant sought to remove a condition from a previous Planning Board approval made more than three decades ago that restricted the number of lots on the subdivision to four. The Capobianco family proposed to subdivide one lot to build a house on the road, which is located off Spring Street, close to Wood Street.

Board members weighed the precedent that voting to remove a previously approved condition would set against the desire of the applicant to create one more lot on the road to accommodate a family member’s home.

At the previous meeting, debate arose about whether the applicant would be willing to widen the private road. Attorney Timothy Nealon, who represented applicants Raymond and Anna Capobianco, said the applicants already had started work to clear the land around the road to make it 22 feet wide, bringing it closer to the town’s subdivision standard. In addition, almost 200 tons of gravel will be compacted to regrade the road. He noted that some brush and trees will need to be removed on the side of the road with a stone wall. No plans were submitted on the roadwork.

Chair Gary Trendel said that he appreciated the efforts to improve the road in a show of good faith. Nealon said he hoped that the approval would go forward with the condition that the improvements be made.

Nealon countered that this was never intended to be a town road. It is a private way. He also stressed that both lots would exceed the area standards of the zoning district. It would not be financially feasible for the applicants to pave the road.

Member Paul Ostrander reminded the board that neighbors at a meeting last month were “fairly appreciative” of the work done on the road by the applicant.

However, member Rob Benson said that voting to remove a condition set by a previous board “doesn’t make sense to me.”

Member Ron Priefer said he “was torn” on the vote. Having a five-lot subdivision would require a paved road by the town’s subdivision standards, which he said was “an unfortunate reality.” On the other hand, if the neighbors are happy with the Capobiancos maintaining the road, he said that the paving requirement is “not fair.”

Debate continued about whether an approval would set a precedent that other developers could use. However, Ostrander noted that “times change” and no neighbors objected.

Gelcich said that a finding could be made that the road is sufficient for a fifth lot. He asked for time to refine the language and offered to take additional comments from board members in case changes needed to be made. If any additional lots were to be added, Trendel said that there should be a condition that the entire subdivision should be brought up to current subdivision standards.

Nealon agreed to the continuation until the next meeting on Dec. 19.

Attorney Paul Alphen spoke on behalf of the applicant, Georgia Stone Industries, Inc., for an earth removal permit to allow the digging of Milford pink granite at the quarry on Lumber Street. He said he was before the board with the same request about two years before, and that permit was approved.

“The quarry has been in operation for decades,” Alphen explained. “It is the source of the unique Milford pink granite. It’s used in a variety of historic structures throughout the country.”

He added that there hadn’t been much demand for the granite during the past two years, likely because of the pandemic. He said he was hopeful that the demand for the quarry would increase.

“My only request is can we call it Hopkinton pink instead of Milford pink since the quarry is in Hopkinton,” Trendel asked with a smile.

Said Alphen: “I know that I would love to, but I think history will control the situation.”

The board requested that an environmental impact assessment be done. Alphen said one hadn’t been done for “more than five years.”

Hearing on The Trails continued again

The hearing on an open space mixed-use development (OSMUD) site plan for The Trails had to be continued again. Engineering consultant Peter Bemis did not attend the meeting. Gelcich explained that Bemis had reached out to Phil Paradis, the town’s consultant from BETA Engineering. However, Paradis told Gelcich he still had outstanding questions regarding the application that had not been addressed by Bemis.

In previous Planning Board and Conservation Commission meetings last month, more details had been requested of Bemis regarding watershed plans, riprap and a study by a hydrogeologist.

The board unanimously approved the lot release request by developer Roy MacDowell at 83 East Main Street for the open space mixed-use development (OSMUD) that would include replication of a historic house and three age-restricted condominiums. The site, part of the Village Center zoning subdistrict, is a small triangular plot at the corner of East Main Street and Legacy Farms Roads North, just west of Weston Nurseries.

MacDowell explained that ever since Legacy Farms was created, whenever there is a transfer of ownership of a parcel, particularly upon the receipt of an approval not required (ANR) plan, he is required to appear before the board to get acknowledgement of the transfer via the approval of a Form K. This was an administrative procedure that allowed the lot to be released by a unanimous vote.