The residents who proposed two four-lot developments off Cedar Street Extension and Lincoln Street introduced two new plans at Monday’s Planning Board meeting in hopes of getting support from board members.

Lincoln Street residents Courtney and Kyle Derderian — along with project designer Joe Marquedant — took feedback from previous Planning Board meetings in coming up with their new designs for what they are calling Deer Ridge Estates. One design (Plan A) shows a seven-lot development off Cedar Street Extension with two homes at the end of Lincoln Street. The second design (Plan B) has nine homes off Cedar Street Extension and no new homes on Lincoln Street, although it proposes constructing a cul-de-sac on Lincoln Street to improve safety and convenience there. Lincoln Street currently has a flat end, and with it being a narrow road, Courtney Derderian said school buses won’t travel on it and trucks are forced to back down the road to leave.

Board members praised the applicant for the new design ideas, but concerns were raised about having a long cul-de-sac off Cedar Street Extension and potential safety issues with only one access road.

Fire Chief Steve Slaman said ideally emergency personnel ideally would have more than one way to access every road, indicating that if a fallen tree or another obstacle were to block the roadway his trucks would have no way to reach homes there.

“In a perfect world we could access from two directions,” he said, although he noted that the developer expressed a willingness to install fire sprinklers in the houses as a compromise.

Plan A has the new road off Cedar Street Extension at 1,000 feet, which is the maximum allowed for a dead-end road without a waiver. Plan B has the new road at 1,159 feet, although that was an adjustment after talks with the fire chief, as it shortened the length of the driveways off the cu-de-sac. 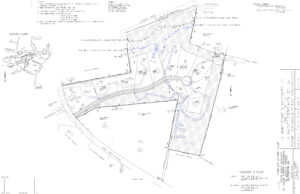 Board members expressed a desire for the new road to connect with Lincoln Street — with a gate to prevent through traffic — not just for safety but also for community reasons.

“As a community, being able to be connected to your community through walking, biking or jogging, there’s real value there,” said vice chair Rob Benson, who chaired the hearing.

Gary Trendel suggested removing one of the house lots if necessary to make room for a connection to Lincoln Street.

“We’d have to waive the length of the dead-end street off of Cedar Street Extension because it would be slightly more [than 1,000 feet], but that becomes a little bit easier for me to process or digest personally when there is that emergency road connectivity between them,” Trendel said. “I’m looking at it, you’re still getting eight buildable lots there. … To me that’s something that I could get comfortable with.”

Fran DeYoung said he would prefer the new road stay under 1,000 feet. “I really would like to stay within the purview of what the bylaw states,” he said.

It also was not clear if the board even had the power to waive the 1,000-foot dead-end limitation. Town planner John Gelcich, after talking to assistant town manager Elaine Lazarus, said it might require a variance from the Zoning Board of Appeals.

Courtney Derderian asked the board for more guidance so that the project could move forward.

“We’d really like for the board to commit to us a direction to go with, because we’d really like to move from our concept to our definite plan state,” she said.

However, board members were split on which option they preferred — A, B or the original plan — with the emergency access to Lincoln Street the primary sticking point.

“I’m not comfortable with any of them as they currently stand,” Trendel said, adding: “I think there’s still some work to do on the design front.”

Engineers representing the Massachusetts Department of Transportation checked in to discuss the state’s plan to redo the Fruit Street bridge over Interstate 495 as part of the I-495/I-90 Interchange Improvements Project. As part of the plan, the state plans to alter the landscape, affecting 83 trees and 290 feet of balanced stone wall. While the plan calls for bringing in new trees and relocating the stone wall, board member Muriel Kramer expressed concern with what she called “the most scenic roadway in town.”

“I would never suggest we impose on the state’s ability to create the improvement, but if there is a choice about the ways that they do it that protects the scenic value of a roadway in Hopkinton, I do think that’s an appropriate [discussion],” she said.

The plan would widen the road, add shoulders on both sides (which cyclists could use) and add a sidewalk that would run from the intersection with Saddle Road Road to Huckleberry Road. The sidewalk plan was well received, including by a couple of residents who called in to say it would allow for far better walking/cycling access and safety.

The board approved a series of waivers for the proposed three-house development off Leonard Street.

Developer Lou Petrozzi will be allowed to skip the required environmental analysis and traffic impact report. A waiver also was granted for the minimum 40-foot right of way (Petrozzi’s plan has it at 27 feet) and for Petrozzi to construct a hammerhead turnaround using a driveway.

The board also voted to designate the proposed construction — a section of Leonard Street — as a rural road, setting the minimum width of paved travel way at 20 feet.

Developer Ron Nation introduced plans for a nine-home cul-de-sac in a wooded area off Hayden Rowe Street, with the access road at the open field near the corner with College Street (the field that has a billboard on its north end). The land is owned by Margaret Paolini.

During a brief discussion, questions were raised about wetlands on the property.

A site walk was scheduled for Nov. 14, and the hearing was continued to Dec. 7.