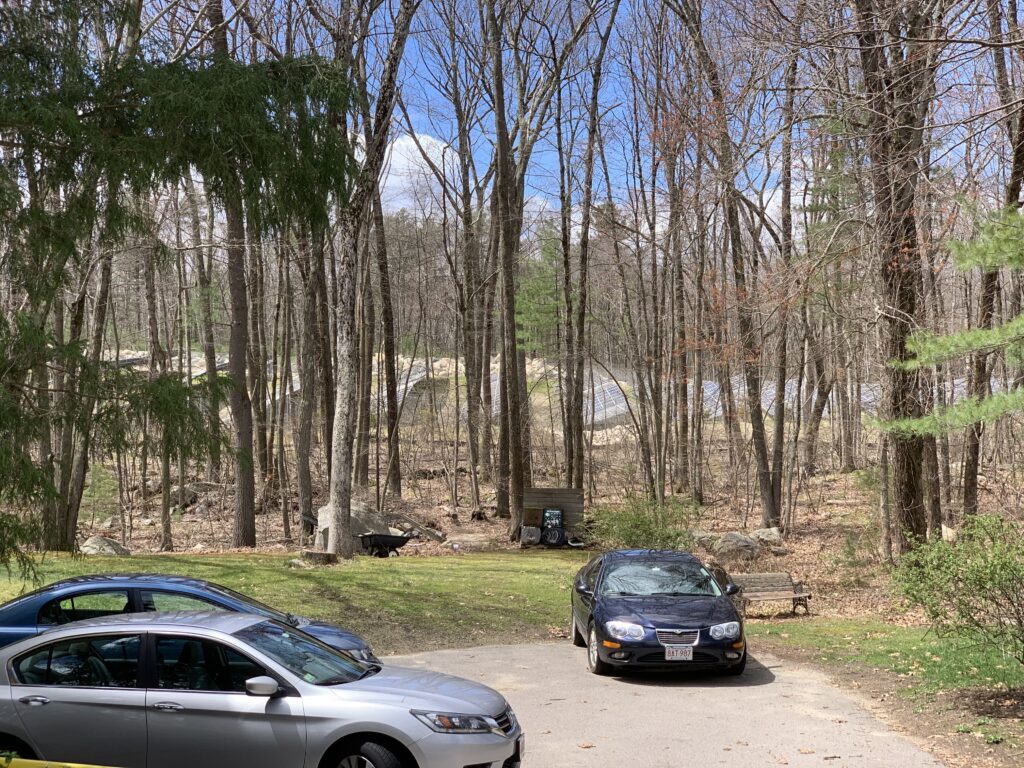 A solar array is plainly visible from the backyard of many homes on Alexander Road, in the Charlesview Estates neighborhood. PHOTO/JERRY SPAR

Seeking to update the bylaw to give the town more control over where commercial, ground-mounted solar installations are located, the Planning Board has been hearing from frustrated residents as well as property owners who have expressed an interest in having their land approved for solar.

“Zoning is always a little tricky, and this one is a big deal,” Planning Board chair Muriel Kramer said. “People feel passionately on both sides. I think everybody understands it from everybody else’s angle, and people in general really support solar. So it’s an interesting tangle.”

According to the town’s current bylaw, commercial, ground-mounted solar installations are allowed anywhere in town.

They are subject to Planning Board and Conservation Committee review, with screening and setback restrictions as well as wetlands protection. But if a project meets the special permit criteria and is not requesting any waivers, the Planning Board cannot deny the application, and neighbors are virtually powerless to stop it.

“We cannot legally reject something if it meets all the criteria,” Planning Board member Mary Larson-Marlowe explained during the April 27 Planning Board meeting. “All we can do is negotiate appropriate setbacks and screening.”

The proposed amendment to the town’s solar bylaw would add a commercial solar overlay district to the zoning map in order to place some town control on new installations, with the goal of minimizing deforestation, limiting the detrimental effect on residential neighborhoods, and balancing the rights of property owners with abutters.

The Zoning Advisory Committee researched options for solar bylaws that would comply with state law and discussed it at five ZAC public meetings between October 2019 and January 2020, then put together a preliminary overlay map in January.

“It was just a matter of trying to identify places where solar would be universally unobtrusive and not problematic and likely welcome,” Kramer said.

Parcels included in the overlay district still would require a special permit, including Planning Board and Conservation Commission approval process to review adequate screening, setbacks, protection of wetlands, stormwater management and more.

Projects not included in the overlay district would require a two-thirds vote at Town Meeting to be added before applying for a special permit.

After the original map was presented, some property owners reached out with requests to add parcels. Among them were multiple parcels that abut the Charlesview Estates neighborhood. That raised the alarm for some residents there, as there already is a solar array that was constructed on a Lumber Street property that backs up to Alexander Road and is clearly visible from many homes there.

Numerous Charlesview residents participated in the public hearing portion of the April 27 Planning Board meeting and expressed disappointment with the effect the Lumber Street installation has had on their neighborhood since it was constructed in 2018.

“At the town meetings we were promised an adequate buffer zone, and that trees would be planted to shield the panels. Those statements could not be further from the truth,” Alexander Road resident Rick Voss said. “The solar panels are broadcast across the rolling hills and glare in the afternoon sun, creating an absolute eyesore even beyond the worst-case scenario we had imagined. … The loss of property value is immense and immeasurable.”

Added Teresa Road resident Laura Poovakad: “No one wants to buy a house with a solar farm in their backyard. No one wants to look at it. So why would it be a good idea to add another one?”

Teresa Road resident Sean Kimball, whose backyard abuts one of the properties proposed for a new solar permit, said his primary concern is water runoff if trees are cleared. He said he already pumps out up to five gallons a minute from his basement during the spring and fall.

The primary counter argument is that owners should have the right to use their land as they desire.

“I’m in favor of no map,” said resident Craig Nation. “I agree that solar doesn’t belong everywhere. But I think that putting a blanket over the town to me doesn’t feel like the right thing to do, with the stripping of property rights of land-owners. I think the better path would be to consider modifying the existing bylaws to make solar more palatable to abutters and others in town.

“I would caution the unintended consequences of banning solar,” he added. “Be careful what you wish for. People have property and they intend to do something with it, I’m sure. Solar may have been a better option. If you ban it, they’re going to do something else with it, and we don’t know what that is.”

The Planning Board will continue the public hearing at its June 1 meeting.

The COVID-19 pandemic has added a new wrinkle. The Planning Board has forwarded an article to the Town Meeting warrant to reserve a spot for this item. However, Town Meeting was rescheduled from May 4 to June 22 and there is some speculation it could get pushed back to the fall, or only include emergency items (as Select Board member Brian Herr suggested at the April 28 Select Board meeting).

Even if Town Meeting is held as scheduled, the Planning Board could decide to hold off on putting an overlay map before voters — it will require two-thirds support to become law — until the next Town Meeting. However, Kramer made it clear that the board does want to get something on the books so that the town has better control over the situation.

“Conceptually commercial uses being permittable in residential districts, I think that is problematic on its face. I’m not really sure why that went in that way,” she said. “The press was, of course, to encourage solar, that’s true. But I’m not sure why from the very start the town of Hopkinton didn’t ensure that ground-mounted solar was not permittable in residential districts.”

The proposed bylaw change likely would not stop projects already in the permitting pipeline, including the Seaboard Solar project on the Liberty Mutual property off Frankland Road, where 27 acres of forest are slated to be cleared.

This issue also does not affect residential or commercial solar roof installations, including parking lot structures.