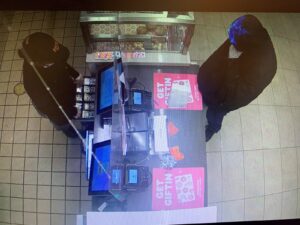 This photo from the Dunkin’ on West Main Street was released by the Hopkinton Police Department.

Hopkinton police continue to seek more information about Saturday night’s incident at the Dunkin’ on West Main Street, and a spokesman said they have not been able to identify the individual who is alleged to have robbed the establishment.

According to Hopkinton Police Lt. John J. Porter, a white male entered the store just after 9 p.m. and ordered two doughnuts. When the clerk opened the register, the man told her to give him the cash drawer. He did not indicate he had a weapon, but the clerk felt threatened and gave him the drawer, which he took with him as he ran out the door.

The clerk was not physically assaulted by the man, who was identified as between 5-foot-7 and 6 feet tall, wearing a black hooded sweatshirt, tan winter gloves and a black face mask.

“She was shaken up, obviously, but not physically harmed,” Porter said.

Porter reported that the cash drawer, which was found nearby the day after the robbery, has been “fingerprinted and sent to the lab.” Police also are trying to determine if the man had been spotted nearby prior to the incident.

“Detectives are canvassing area businesses to see if the person responsible had been in the parking lot of any stores in the area,” Porter added. “We anticipate there to be video, especially Mobil and Cumberland Farms [neighboring gas stations/convenience stores], and we’ll look for a person who matches the description.”

Porter explained that police must go through the companies’ corporate offices to obtain the video surveillance, so it takes longer.

Anyone who witnessed the incident or might have any information is asked to contact Detective DeBoer at the Hopkinton Police Detective Bureau at 508-497-3401, extension 1279 or the Crime Tip Line at 508-497-9785.