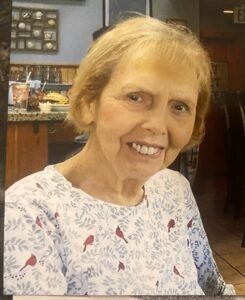 Alberta Inez Irvine, 92, of Framingham and formerly of Hopkinton, passed away Dec. 20 at Newton-Wellesley Hospital. Born in Dover, Delaware, she was the daughter of the late Cora (McCauley) and Frank Wilson.

She was the beloved wife of 21 years to Wallace “Wally” Irvine of Hopkinton. Wally and Alberta met later in life after both losing their spouses to cancer. They met and fell in love at a bereavement group and married two years later in 1999. They were devoted to each other in every way possible and moved together to Brookdale Cushing Park. The pandemic could not keep these two lovebirds apart. Wally continued to visit when possible and also utilized technology to keep in contact with her.

Alberta enjoyed baking and cooking. She was an avid seamstress and gardener.

A memorial gathering will be held on Friday, Jan. 15, from 4-5 p.m., with a service to follow at 5 at the Chesmore Funeral Home of Hopkinton, 57 Hayden Rowe St. Interment will be held at a later date.