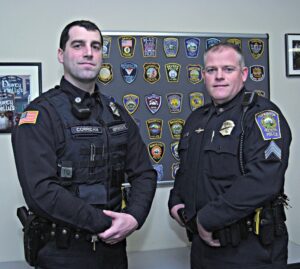 The Police Department’s recently announced Hopkinton Business Camera Registry (HBCR) actually is part of a community initiative that began a few months ago.

“Because we have a lot of new police officers on the force now, I wanted to find a way to help connect them with the community,” Sgt. Scott van Raalten explained. “Last fall, I reached out to the Hopkinton Chamber of Commerce. We were looking for a way to recreate the small-town feeling, back when they knew their local police officers by name.”

In September van Ralton hosted a meeting for chamber members and new officers, which included a tour of the police station.

While there, chamber members listened to a presentation by van Raalten on issues like traffic, population growth and crime prevention.

Also discussed was the the importance of updating business contact information as part of the Crime Prevention Through Environmental Design program developed by Hopkinton Police Officer Arthur Schofield.

“Too often when an investigation requires contacting local businesses, our contact information turns out to be as much as a year out of date,” van Raalten said. “Then finding the right individual to contact can add additional time and resources and delay the investigation.”

HBCR was the brainchild of Hopkinton Police Officer John Corridan, who had seen the system employed in Western Massachusetts when he was an officer in East Longmeadow.

The Hopkinton Chamber of Commerce has agreed to support the HBCR program and has already begun encouraging members to take part.

Added Brown: “I think it’s an incredible idea and I’m very excited about the partnership between the local business community and local law enforcement.”

Police are asking local businesses that have security cameras to participate by voluntarily registering with the department.

“When a crime occurs, we will be able to identify the locations of nearby video cameras and enlist the assistance of the community to help officers collect video evidence and follow up on leads,” the HPD explained in a press release. “Police would ask HBCR participants to check their video surveillance system for a specific date and time for video that may show activity involved with a crime, such as a getaway car or the direction that a person of interest traveled.”

Similar programs have been showing success both within the state and across the country.

As noted on the website of the police department in Berkeley, California: “While private security video systems may deter crime, they also serve to capture valuable evidence which can be used to identify and apprehend suspects who have been recorded in the commission of their crime. Many residents and business owners currently operate security systems which could aid in criminal investigations, and we have had great success from community members who have supported.”

The eventual growth of participation in HBCR is expected to be a major benefit to the whole town.

“We have about 200 local businesses and more than 70,000 residences,” van Raalten said, adding, “If you know you’re being watched, you’re going to be less likely to do something you shouldn’t.”