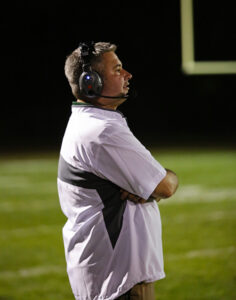 Jim Girard, who guided the Hopkinton High School football team to the Division 4 state semifinals in 2017, has stepped down after nine years at the helm of the Hillers and an overall record of 64-36.

“It was simply the right time,” he explained.

The Hillers went 6-4 (3-2 in the Tri-Valley League Large School Division) this past fall, capping the season with a 21-6 victory over Ashland on Thanksgiving Day. The previous season, they won the TVL for the first time since 2005, going undefeated in league play.
According to HHS athletic director Dee King, Girard’s success on the field will not be his primary legacy.

“Obviously he had some really fantastic years from a record standpoint, but if we remove any of that, any football outcomes that happened, just the experience that he provided for the student-athletes who were a part of the football program and the community-building piece of what he did to rally people around the sport that he loves is just fantastic,” King said. “Big shoes to fill, for sure.”

Girard took over as coach of the Hillers in 2010 after two seasons as head coach at Dover-Sherborn. Prior to that he was an assistant coach at Wayland and Lexington.

“I have been fortunate in my 20-plus years as a football coach to have worked with student-athletes who have their priorities in order,” he said. “I have thoroughly enjoyed everywhere I have coached and have learned so much along the way. I am thankful that Hopkinton game me the opportunity to continue to do what I love to do. I will always be grateful for the experience.”

Although the 2017 season clearly was his most successful in town — he was named New England Patriots High School Coach of the Week midway through the campaign— Girard said his tenure was memorable overall.

“My time at HHS was a personally fulfilling and professionally rewarding experience on so many levels,” he said. “I met so many terrific people; had outstanding community and parent support, worked with the best assistant coaches and formed so many positive relationships. Perhaps the most enjoyable part has been watching the players grow during their high school years athletically, socially, emotionally, etc., watching them overcome challenges and watching them successfully transition to the next phase of their lives.”

King said she saw firsthand Girard’s impact on his players’ success when she worked in the HHS guidance department before she became athletic director.

“I got to see the level of care that he has for kids and helping them, not just on the field but in their college process, while they were getting recruited — he was instrumental in that,” King said. “And then being able to have a closer look over the last three years in terms of how he ran a program, top to bottom, it was honestly unparalleled, what he did. He checks off every box in terms of what we look for in a coach. Ultimately, first and foremost, cares about kids and their well-being. Obviously as the football coach a high level of organization and vision. He excelled at those. He excelled at parent and community relations. He had scope. He really, really did it all.”

Girard indicated he plans to continue coaching in some capacity.

“I will never not coach football,” he said. “It is what I do. Although my title may differ or my role on a staff may change, I will always be involved in some capacity. I look forward to my next stop at whatever school that may be in whatever role that may be.”

As for what advice he would offer to his successor, Girard said: “Lean on the school and community. The support is second to none.”