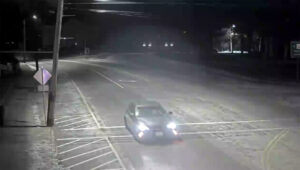 A screen capture from surveillance footage shows a vehicle of interest in an investigation into a hit and run that occurred on East Main Street on Jan. 22.

Editor’s note: This story was updated Feb. 3 with additional information from the Hopkinton Police Department.

The Hopkinton Police Department announced that it is investigating an incident that occurred last month in the area of 7 East Main Street, and it is seeking help from the public.

“On Saturday, Jan. 22, at about 3 a.m., Hopkinton Police received a report of a man lying in the road on East Main Street near Ray Street,” the HPD announced in a statement Thursday. “Upon arrival, first responders found a 31-year-old Burlington man who was injured.”

The individual was transported to UMass Memorial Center in Worcester for treatment of his injuries, and an investigation was launched with assistance from the Massachusetts State Police Collision Analysis and Reconstruction Section, the Crime Scene Services Section and State Police detectives.

“Surveillance footage gathered by investigators as they canvassed the area of East Main Street revealed footage of the 31-year-old man walking on the sidewalk while wearing an orange hooded sweatshirt, but did not show the impact that left the man injured,” the HPD statement continued. “Likewise, surveillance footage reviewed by investigators identified several vehicles that were in the area at the time, but no footage showed the man being struck.

“Police have identified a vehicle of interest in the case, but the ongoing investigation has so far not led to an arrest.”

The HPD is asking anyone who lives on East Main Street, Main Street and West Main Street and has home video surveillance footage from Jan. 22 between the hours of 2-3 a.m. to contact Detective Benjamin Stickney at bstickney@hopkintonpd.org or 508-497-3401, extension 1273.

“”Hopkinton Police and Massachusetts State Police have been working diligently together to actively investigate this incident since the moment our officers arrived on scene, and we are hoping members of the public can assist our investigation by providing footage from home surveillance systems that could potentially provide evidence,” said Chief Joseph Bennett. “We are committed to finding justice and some measure of closure for the victim in this incident, and we ask community members to assist us if they can.”

Earlier in the week, in a Facebook post, the HPD wrote: “We want to assure our residents that this was an isolated incident. There is no concern for the safety of our community.” 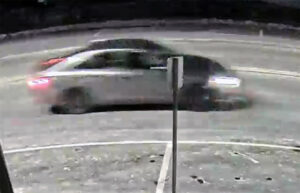 A screen capture from surveillance footage shows a vehicle of interest in an investigation into a hit and run that occurred on East Main Street on Jan. 22.