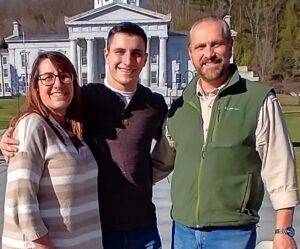 John Powers and his wife, Ann, have always tried to teach their children to embrace the concept of service.

“No matter how big or small the contribution, just contribute and be part of the solution,” John Powers said.

Powers himself knows the concept of service quite well. He served as a U.S. Army officer and in advisory capacities to the U.S. government working on weapons of mass destruction issues, training inspectors to find those weapons in Iraq, and working on domestic and counterterrorism issues. He continues to work at Hanscom Air Force Base as a foreign disclosure officer.

While much of Powers’ work has taken him overseas, last year his services were needed a little closer to home.

In the spring of 2020, the number of COVID-19 cases, hospitalizations and deaths were increasing at an alarming rate. It was around this time that the White House COVID-19 Task Force called for volunteers with specialized backgrounds to help with various efforts to fight the pandemic. And once again, Powers answered.

Powers and his team sat in on multiple briefings that outlined what help was needed, which at that juncture included a considerable emphasis on testing.

Only two companies made the specific type of nasal swabs needed for COVID testing. One company was located in Italy, which was being devastated by the first COVID outbreak and in lockdown. The other company was Puritan Medical Products, headquartered in Guilford, Maine.

In order to produce the millions and millions of swabs needed, Puritan would need more manufacturing space. Through federal funding, an old plant was leased, gutted and equipped in the nearby town of Pittsfield.

The second production facility came to fruition through the efforts of many, including that of Powers and his team.

“All the work I did was from home or the base. We couldn’t travel because of the pandemic. Our focus areas were contracting, funding and assisting in removing obstacles to meeting the government’s schedule,” Powers explained.

Due to the specific type of swab and specialized manufacturing necessary, it was quite a challenge for all those involved to meet the government’s aggressive timeline.

Powers’ specific role was assisting Puritan in locating new machinery and tooling partners. The company had been using the same supplier for years and had no reason to change — that is, until the pandemic hit. However, because the new swab requirements were very specialized, the company needed to find a company that could do the work quickly and reliably.

As a result of Powers’ work overseas, he had access to specialized fabricators. He reached out to them and was able to connect Puritan with additional machining capabilities to meet the requirements.

“It wasn’t the biggest role, but it mattered. It was my small part,” he said.

It seems that Powers’ life of service has influenced his children, including his twin sons, who both are ROTC cadets.

“My father’s service and volunteer work have made a tremendous impact on my siblings and myself,” said son Ben, a student at Norwich University. “He has been an amazing example for us to learn from and follow. My brother and I especially look forward to proudly continuing the family tradition of military service, and are grateful to our parents and community for giving us that opportunity.”

For his role in COVID testing, Powers was awarded the Armed Forces Civilian Service Medal. The award was established to recognize the contributions of government civilians who engage in military operations that support specific peacekeeping and humanitarian missions.

← Library Corner, May 19 edition Meet the candidates for 2021 Town Election →