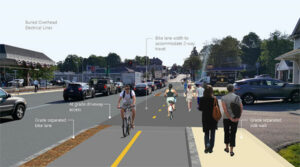 Plans for Main Street include widening the road to include a two-lane bike route.

The bike lane scheduled to be constructed as part of the Main Street Corridor Project to upgrade the town center will pose safety hazards to bicycle riders, insists town resident Ed Harrow.

The work includes the addition of a two-way bike lane on one side of the road, which Harrow questions. 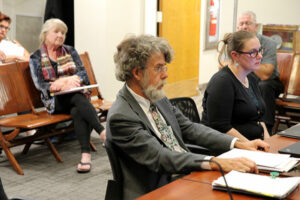 Resident Ed Harrow took his concerns about the proposed bike lane to the Select Board at its Sept. 24 meeting.
PHOTO/JOHN CARDILLO

The large number of curb cuts will pose dangers to cyclists from drivers entering or exiting the parking areas, he insisted.

When a car pulls out of a curb cut between the library and Route 85, he said, one would look for traffic on the left, rather than the right, he said, citing an example.

The lane will “hide bikers behind parked cars from traffic” and from drivers seeking to enter driveways along the steepest part of the center.

Harrow, who expressed his dismay to the Select Board at its Sept. 24 meeting, also raised concerns that the bike lane has a grade of almost 7 percent, which he said “may not sound like a lot’’ but could increase speeds of bicyclists.

The result could be disastrous, he said. “I see how this could end,” he said.

The bike lane is scheduled to be part of the Main Street Corridor Project, which affects Main Street from just west of Wood Street to Ash Street, totaling eight-tenths of a mile.

The project is meant to improve traffic flow, safety of pedestrians, bicyclists and motorists and to provide significant streetscape and aesthetic improvements to create a safer, more usable downtown, according to an official description of the project on cleargov.com.

Harrow questions whether the changes will increase safety, as the plan calls for. He said he fears the opposite will happen.

“The desired result of connecting the Center Trail to parts east can be done in a much safer way,” he said. “I have other ideas on how this can be done in the absolutely safest way.”

He said he wants to discuss these ideas with officials before making them public.

Town manager Norman Khumalo, along with members of the design team and bicycle experts, met personally with Harrow in mid-September. Khumalo stressed that the team is open to making adjustments if warranted.

“We met with Ed for over an hour and we listened to his concerns,” Khumalo said. “We explained to him that we do share his concerns regarding safety. We understand the challenges that are presented by the topography of the downtown and how it impacts sight distances. As we’ve been explaining, as we continue to refine the plan we will continue to review, investigate and resolve — if we can, the best way we can — the concerns that he has raised.”

Added Matt Chase, from the engineering firm VHB: “We’ve heard Ed loud and clear and reviewed his comments. We’re going to continue to advance our design and look for ways to enhance what we currently have.”

Harrow, who is 71, said he has been riding bicycles since the age of 5, and he worked in the bike industry for 10 years.

He said he supports the concept of bike lanes, but not in the busy town center area.

As it now stands, the bike trail in the center will be a “white elephant” that bike riders will not use, he said.

He said the chances of the project being changed at this point are “very small.” But he said he the project involves “unsafe compromises.”