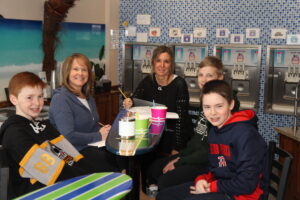 Kellie Chatten Kenney grew up in Hopkinton and now resides here with her own family.
When she heard that Hopkinton was named America’s Safest City by a home safety review company called SafeWise, she was not surprised. The town may have changed a great deal since she was younger, but while the population has soared crime has remained low.

“It just solidified that my mother made the right decision to move us here when we were kids,” she said. “My sister, both my brothers and I have all either stayed in Hopkinton or moved back to raise our kids here.

“Hopkinton is a wonderful and safe community with a phenomenal school system. I feel the town is just as safe now as it was when I was a child. I let my children go to events in town and walk to the center of town on early release days and feel like they are completely safe.”

According to the company’s website, SafeWise used the most recent FBI crime report statistics and census population data, then based the evaluations on the number of reported violent crimes (aggravated assault, murder, rape and robbery) as compared to the population of each town. To break ties, SafeWise factored in the number of property crimes (burglary, arson, larceny/theft and motor vehicle theft).

Those factors determine the ranking of the top 100 communities.

“We have been producing the annual report for five years now,” SafeWise in-house senior security and safety expert Rebecca Edwards told the Independent. “In last year’s report, Hopkinton was ranked at 73 out of the 100 safest towns. The year before that it was at 15. But this year we raised our population threshold and added an extra layer of data.”

Hopkinton Police Chief Edward Lee attributes the town’s high level of safety to a collaboration between his department and other sectors of the town, including schools.

“We now have three school resource officers and a comprehensive drug education program.” Lee said. “We also have a solid community policing initiative and a great detective division. And we look forward to continue our collaboration with our community partners that constantly strive to provide services, educate the public and prevent crime.”
Selectman and longtime resident Brendan Tedstone agreed that the ranking is representative of a team effort.

“The honor bestowed upon us is a tribute to not only the tireless work of our police and fire departments who ensure the safety of our town but also to our educators who work hard to instill positive core values in our youth,” he said. “This is just another honor that makes Hopkinton the greatest place to live and raise a family.”