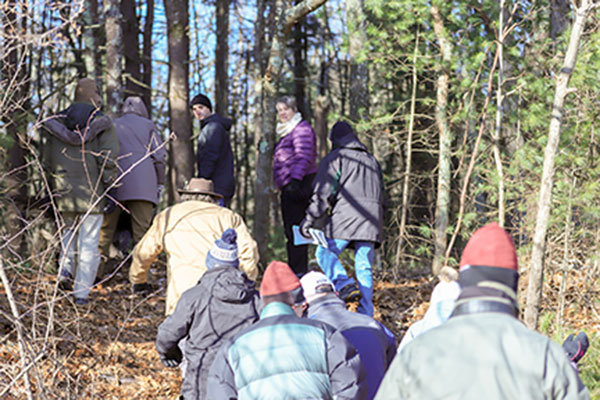 Members of the Hopkinton Planning Board and concerned residents were among those who recently did a site walk on the property in East Hopkinton that is being proposed for a solar farm. PHOTO/CHRISTINE STRICKLAND

A number of citizens are not happy with the probability of a large-scale solar farm being constructed in town. If approved, the new solar project would be located at 71 Frankland Road, near the former Liberty Mutual facility, and be operational sometime in 2021.

According to the latest plans submitted by the applicant, Seaboard Solar Operations, the proposed facility would be a 5.0 megawatt, direct-current, ground-mounted solar photovoltaic array with one 3,510 kilowatt-alternating current/9,000 kilowatt hour lithium‐ion battery energy storage system.

Seaboard Solar plans to acquire Liberty Mutual’s entire 68-acre parcel and install the solar farm on a portion of it. A building on the property will remain and could be rented out.

Much of the frustration from residents involves plans to clear 27 acres of forest for the project.

“It’s such a beautiful piece of land,” said resident Ann Karnofsky. “You don’t go in and destroy a forest and its habitat. If this goes through, it will be a great loss for the town of Hopkinton.”

The project still needs final approval from the Planning Board and Conservation Commission. 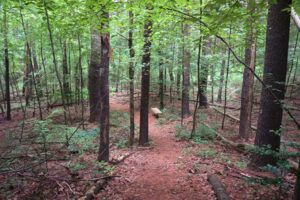 The Deer Run Trail runs through the property that is being acquired by Seaboard Solar Operations for a solar farm. PHOTO/HOPKINTON AREA LAND TRUST

“We’ve been talking to them, and obviously we are devastated we’re losing all that forest,” Gasser said.

“They’ve said publicly they would preserve that trail, plus a number of others, but details have not yet been presented.”

Gasser’s hope is that the land outside of the solar farm will remain as open space and possibly turned over to HALT with a conservation restriction on part of it. Still, if the plan moves forward, Gasser believes the feel of the land will be lost.

“Right now all you see is woods. With the solar farm hikers will see solar panels or a row of trees as a buffer blocking the panels,” he said.

Planning Board chair Muriel Kramer said with Hopkinton’s current bylaws in place, the town’s hands may be tied.

“Right now, it’s permittable in any zone,” she said.

That includes commercial, industrial and residential.

However, that could all change with a vote at Annual Town Meeting on May 4. Kramer explained there is an article on the warrant that, if approved, would create a solar overlay district, allowing future projects only on certain parcels in town.

“The article is meant to take an active step for voters to come together and decide if they want to keep the bylaw status quo and permit them anywhere in town or designate them to certain areas where they would be more acceptable,” Kramer explained.

However, the vote comes a little late for resident Scott Ober, as the Frankland Road solar farm would be grandfathered in. Ober said the project is hitting a little too close to home — literally.

“It’s at the backside of our property, about 100 feet from our property line,” the Fawn Ridge Road resident said. “Our home and our next door neighbor’s home are most directly affected. It will literally be in our backyard.”

Ober said he has a multitude of concerns, one of the biggest being the tree clearing.

“That’s 27 acres of mature forest. What will happen to the wildlife? I did a site walk through the area and it’s just heartbreaking to think about,” he said.

Ober also has concerns about the project’s effect on property values as well as questions about potential safety and health issues.

“Our whole neighborhood is on well water. Is someone going to assure us there won’t be contamination from any runoff?” he questioned.

Ober said he and his neighbors are not against solar power at all.

“This isn’t a ‘Not in my backyard’ situation. There’s so much more to it,” he said. “We’d just like to see a more thought-out approach when it comes to it.”

Ober added that he plans to attend Town Meeting to vote in favor of the overlay district so other residents don’t have to go through a similar situation.

Seaboard Solar Operations did not reply prior to the Independent’s deadline to a request for comment.