Retiring Fire Chief Slaman born for job: ‘Something in my DNA’ 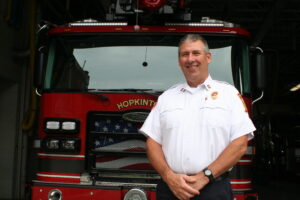 Steve Slaman leaves the Hopkinton Fire Department after five years as chief and more than 30 years as a firefighter. PHOTO/JERRY SPAR

As Hopkinton Fire Chief Steve Slaman prepares for his retirement on Aug. 27, he is putting the final touches on what will be his legacy at the station.

In his five years as chief and 30-plus years with the Hopkinton Fire Department, Slaman increased the size of the department to meet the growing population in town, fostered good relations with people and groups in the community, and helped lead the town through the COVID-19 pandemic.

Slaman was an overwhelming favorite among fellow townies to become chief five years ago, and he quickly showed he was the right person for the job, due both to his experience and his affable personality.

“I was lucky to start at a young age,” said Slaman, 57. “I had a grandfather that was a fire chief in Wellesley, and my father was a call firefighter for the town of Hopkinton. So I got exposed to it all really early.”

It all clicked for Slaman when he first got a chance to work at the station. He realized his calling, and it spoke to him far more than his efforts at college studying engineering. Slaman said he knew from the beginning his time at the department would make for an amazing experience.

“It really was something in my DNA,” he said.

Slaman’s legacy includes the addition of seven firefighters — an essential upgrade in personnel for a rapidly growing community in need of faster emergency response times. Slaman taught his firefighters not only how to combat fires, but also how to remove hazardous materials and perform technical rescues.

“I think the best way to describe it is when someone has something that’s affecting them and they’re not sure what to do, they call us,” Slaman said.

Slaman said the timing of his departure works perfectly, as he and his successor, Deputy Chief Bill Miller, brought up an infrastructure of talented firefighters. The department looks to expand even more. Slaman has reached out to a consultant to talk about how the HFD should foster growth in the future.

One area of focus is community risk reduction. This includes preventing home and community falls, vaccine distribution via paramedics, evaluating children with special care needs, and providing resources for depression and suicide prevention.

“You never want to see your community go through that kind of stuff without any help,” Slaman said. “It’s really traumatic — a fire or medical emergency. I get asked to talk about some of the big incidents in the past, and I hesitate to do it. I live for that — I love being able to serve, but I also recognize it’s someone else’s worst moment.”

He considers the strong relationship and trust between the department and its collaborators — Hopkinton Youth and Family Services, the Hopkinton Emergency Management team and others — a boon for the community.

“There’s been a lot of stuff that’s happened locally and nationally that’s challenging everybody’s ability to stay together as a community,” Slaman said. “But I think we’re doing good in Hopkinton. I think there are challenges in front of us, but we’ve really managed well and looked at ourselves honestly. But there’s still some growth to happen.”

Select Board Member Brendan Tedstone grew up as Slaman’s neighbor. Tedstone said he considers Slaman a lifelong friend who has the natural qualities of a great chief — someone who maintains the strengths of the department while focusing on what needs improvement.

Tedstone said he originally ran for a Select Board seat because he felt Slaman was not getting a fair shake in the search for fire chief more than five years ago. He thought the Select Board was overlooking Slaman’s qualifications when it decided to expand its search.

“My entire platform was to promote Steve Slaman to fire chief from deputy chief,” Tedstone said.

Tedstone views the retiring chief as both ethical and dedicated to his work. He said Slaman quickly gained the respect and approval of all who worked under him.

Slaman considers himself lucky to have established the good relationships he did with groups like the Hopkinton Senior Center and other town departments. These relationships helped expand their collective capacity to serve the community.

He’s also especially proud of how his firefighters worked together to quickly reopen the Fire Department after the pandemic shut it down.

For Slaman, the decision to retire stems from a combination of factors. While he’s content with the state of the department, Slaman said he knew the proper time had arrived to step back. He knew as far back as a year ago that retirement wouldn’t be long in coming.

“I’ve always looked at this date anyways because I didn’t want to work until I was old and couldn’t do anything,” Slaman said. “And I love the outdoors. I’m going to this camp up in Vermont that I want to do some work on.”

Added Slaman: “I really am happy where everybody is at. My deputy just earned his spot to replace me, and I’m ecstatic about that. He has several really good candidates that are ready to be a deputy chief.”

Other than going up to his quiet, peaceful spot in Vermont, Slaman said he still is working out the details of how he will keep busy post-firefighting.

He made a point to thank the community for the opportunity it gave him to serve. He also cites former longtime call firefighters Bob Bartlett and Thomas Spinks as two individuals, among others, who greatly influenced him.

“That’s what’s nice about the fire services, it’s a really good career,” Slaman said. “It’s very fulfilling, and you make a living at it. You might not become rich, but … it’s something I’d recommend to anybody if they’re looking for things like that. You get to do a public service and make a living out of it.”