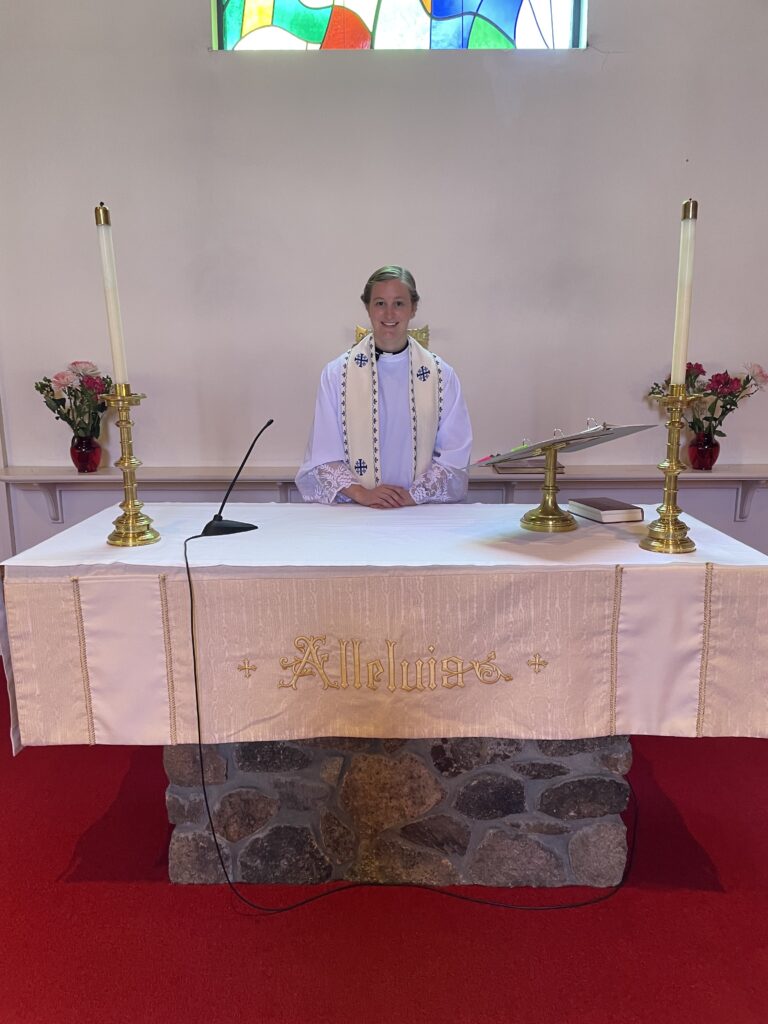 Church attendance has been in decline across the country, Rev. Mary Rosendale says, and studies indicate that the pandemic has accelerated that decline. “The research that I have read said that one of the main reasons why … is that people just don’t feel like church is relevant anymore,” she says. Rosendale is working to buck the trend through her work at St. Paul’s Episcopal Church in Hopkinton and St. Stephen’s Episcopal Church of Westborough, two congregations that have been sharing Rosendale as their priest-in-charge since Sept. 1, 2021.

After the Sandy Hook school shooting, for example, Rosendale recalls reading about people going to church the Sunday after “because they didn’t know where else to go. And a lot of churches didn’t lean into talking about the shooting because they didn’t want to be political. And so they said nothing, and so people left and said, ‘Well, if the church isn’t going to help me make sense of 26 people dying in an elementary school, what’s the point?’ ”

Rosendale concedes that she can’t make sense of “the trauma of the world. … It’s beyond words. At the same time, church should help you make sense of or at least put into context things that have happened in the world,” she says. “And when it doesn’t, it becomes irrelevant and people don’t want to give up their Sunday morning.”

People also are reticent to be told how to vote or think, Rosendale acknowledges, and she says there is no one right approach to addressing current events from the pulpit. “But church should help you at least have a place to pray about the things that have happened in the world that are beyond words,” she says.

Raised in Grand Junction, Colorado, Rosendale earned her Master of Divinity degree from Virginia Theological Seminary and was ordained in 2016. She then moved to Massachusetts with her husband, also a priest, for his job at St. Mark’s Episcopal Church in Worcester. Rosendale preached in Ware for four years until 2020, when she moved to St. Stephen’s, where she now works three-quarters time. Her remaining time is spent at St. Paul’s, where she preaches on the second, fourth and fifth Sunday of each month.

In addition to delivering timely sermons, Rosendale seeks to foster a welcoming and inclusive community. Historically speaking, “organized religion has not always done a good job of making people feel loved for who they are and for who God created them to be,” Rosendale says. “And sadly, oftentimes churches have done more damage than good in this area where they’ve actually made people feel less than, based on a variety of reasons … whether it be people’s race or people’s sexual orientation.”

Outside St. Paul’s, lawn signs read: “God loves you. No exceptions.” Rosendale says the church chose this message “because it’s true. … Churches don’t say that often enough, and if they do say it, they don’t often practice it.” She says the statement is an extension of the overarching Episcopal Church’s tagline of “All are welcome.”

“Going to church is hard,” Rosendale concedes. “I’m a church person, and when I go on vacation I still find it difficult to go to church, because I’m an introvert and I don’t want to be called out in the middle of a service and asked if there are newcomers here; I don’t want too much attention on me.” For those who might similarly be worried about visiting St. Paul’s for the first time, Rosendale assures visitors: “None of those things are going to happen. … People will welcome you and say hi to you, but you’re not going to be called up.”

Although she hopes people will find that St. Paul’s feels like a “home” for them, Rosendale also acknowledges that the church might not be the right fit for everyone. “You can come and you can sit through the service,” she says, “and if it’s not for you, that’s OK, too. … And if it is for you, wonderful!”

← Letter to the Editor: When will Town Common trees be planted? Hopkinton Today: Tuesday, July 19 →