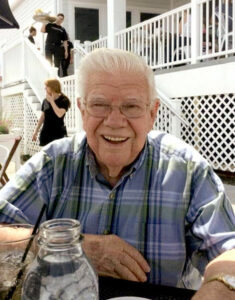 Richard Denham, 85, four days short of his 86th birthday, passed unexpectedly on Sept. 21. He was the husband of Elizabeth (Dunn) Denham, who passed in 2005.

He was born in Newton to James and Dorothy Denham. The family moved to Framingham when he was in high school. After graduating in 1952, he joined the United States Marine Corps and served in Korea. He was honorably discharged in 1955, though he was a Marine for life. He joined what was then New England Telephone and Telegraph. He stayed with all the versions of the phone company, which eventually became NYNEX, where he was a contract inspector involved in the Dig Safe program, which he helped to develop.

Richard and Elizabeth married in 1956 and moved to Hopkinton in 1962 with their family. He enjoyed an early retirement and he and Elizabeth engaged in their dream of traveling. They spent time in Canada, Washington, D.C., and Maine. They later moved to Brewster full time. He cared for his wife for many years when she had early-onset Alzheimer’s disease, earning the respect and admiration of his family and friends forever.

He moved back to the Framingham area three years ago, so as to be closer to his family. Dick was all about family, it was his first thought and the center of his life. His smile was the brightest when he was with his family. Richard was a member of the John Warren Lodge of Masons and the Acacia Club. He was a former deacon in the Grace Congregational Church of Framingham and a lifelong member of the Pioneers Club.

He leaves his loving children, Beth (Denham) Butler and her husband, Al, of Uxbridge, Judith (Denham) Marcus of Quincy, and William Denham of Northbridge; his grandchildren, Al Butler III and his wife, Tanya, of Northbridge, Christopher Butler of Milford, Jamie (Marcus) Bevins and her husband, Matt, of Quincy, and Julie Marcus of Ashland. He also leaves the two girls who stole his heart, his great-granddaughters, Trinity Butler and Addie Bevins. He is survived by his sister, Marjorie (Denham) Coldwell of Southborough, and was the brother of the late James Denham of Framingham and Brewster. He also is survived by many nieces and nephews.

A private military graveside service was held Oct. 4 at the National Cemetery in Bourne. Funeral arrangements were under the care of the Chesmore Funeral Home of Hopkinton (ChesmoreFuneralHome.com). In lieu of flowers, donations may be made to a charity of one’s choice.