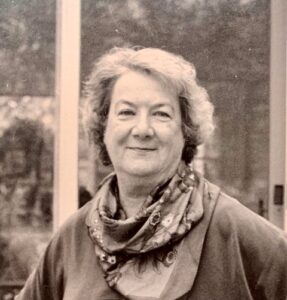 Roberta G. Koning, formerly known as Roberta A. Gately, passed away Feb. 11 at 96 years of age after a short illness. Born Feb. 9, 1926, to Julia (O’Brien) and Francis Gately, Roberta grew up in Roslindale/West Roxbury and lived in Boston before moving to Dover with her late husband, Menno G. Koning.

Fondly known as Bobbi and Robbe, Roberta took an early interest in bookkeeping and math and was hired as a bookkeeper straight out of high school, where she was recognized for her honor roll quality work in her studies. In 1956 she achieved her license to trade as a stockbroker with Merrill Lynch-Boston, becoming one of the earliest women to join the company at this level. She held the license until 1959, when she and her husband started their family together.

Later in 1971, Roberta became president of the Dover League of Women Voters while running her household with her three children. She later became a member of the state League of Women Voters during a very active time during the women’s liberation movement. She held other volunteer positions within the town of Dover and loved the people she met from town while working in these positions. With her husband, Roberta enjoyed traveling through the great cities in Europe and North America. Roberta and Menno were keen bridge players, competing throughout the Boston area and once becoming state champions in duplicate bridge.

Roberta leaves behind her three children and their families: Brion G. Koning and wife Margaret of Framingham, Ria K. McNamara and partner Greg Cipriano of Hopkinton, and Robert J. Koning and wife Catherine of Keene, New Hampshire. She also will be missed by her grandchildren, Brendan and Andrew Koning of Silverthorne, Colorado, Connell McNamara and Patrick McNamara of Hopkinton, and Lynx Koning of Keene, New Hampshire. She also leaves her nephews and their families, John Gately of Virginia, Tom Briody of Rhode Island, and Scott Briody of New Hampshire, as well as the late Charles Gately and wife Patricia.

A celebration of her life will be held at the John Everett & Sons Funeral Home in Natick on March 19. Visitation is at 10 a.m., with service to follow. Burial will follow the service at Highland Cemetery, Dover.