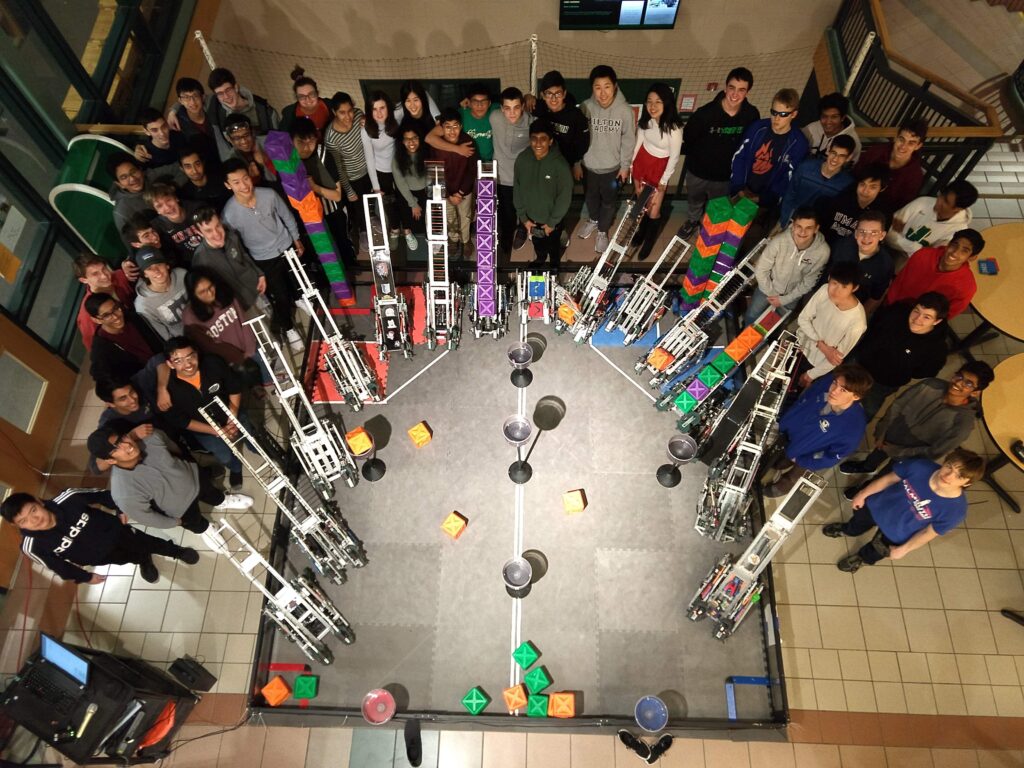 The Hopkinton High School robotics team poses with some students from other area schools at a recent competition.

Hopkinton High School has assembled a robotics program worthy of the national recognition it has received.

But at its roots, or in this case circuits, the program’s ultimate goal is to help its students be competitive in everyday life.

“Robotics at HHS will develop students’ abilities to work with others and to be problem identifiers and solvers,” said Doug Scott, who oversees the program.

When Scott took the reins of Hopkinton Public Schools’ newly formed Business, Technology and Engineering Department back in 2015, he breathed new life into the existing robotics program by creating an inter-campus pipeline.

In the program’s first year of competition, Hopkinton Middle School fielded a team of 15 students. It expanded in the second year to include the high school, which now boasts a membership of some 70 students.

“Hopkinetics” robotics competes in VEX Robotics Competition’s VEX VRC league. Two of the school’s teams qualified for the 2020 VEX Robotics World Championship, although it was canceled due to the coronavirus outbreak.

Each year, VEX introduces a new game with the objective of creating a functioning robot to perform the tasks necessary for victory. This year’s game is Tower Takeover, played on a 12 foot-by-12-foot square field with an objective of outscoring opponents by placing cubes in towers or scoring cubes in goals.

At competitions, four teams are chosen at random and split into two alliances. Teams compete on opposite sides of the field — blue vs. red — using their robots and coordinating with drivers, scouts and their coaches.

Team 2602A qualified for the world competition after achieving best overall performance honors at a Worcester Polytechnic Institute-hosted event.

The program’s all-girls team, Team 2602G, was one of 10 teams in the world to receive the Community Service Award for its work promoting STEM (science, technology, engineering and mathematics) in Hopkinton and beyond.

For Jahnavi Prudhivi, a Hopkinton High sophomore and member of the 2602G team, nicknamed “Greatest Girls Of All Time,” her involvement with the program began with hesitancy — but quickly became a passion.

“I didn’t have much experience, but I thought of giving it a shot and I did,” Prudhivi said. “Looking back, I know I’ll never regret the decision I made. I absolutely love robotics and I love spending time in the workshop.”

Prudhivi and her teammates have experienced plenty of success, and she has found the setbacks along the way have made the experience more enjoyable.

“There were days we got frustrated when we couldn’t figure out solutions to certain problems, but what’s so fascinating about this is that a lot of teams step in and help each other,” she said.

Added Scott, “Team skills are the most important as the kids need to work together to develop a system that reaches their set objectives as a team. The kids have to be resilient because they will experience failures throughout the season.”

Scott’s interest in the field traces back to his youth, when he would frequently participate in engineering projects. He received an undergraduate degree in business and later went back to school so he could teach technology.

His interest in robotics originated when he and a group of IT students assisted a marine archaeologist in locating a wreck in a lake in New Hampshire.

“I am passionate about it now because I utilize it as a vehicle to develop transferable soft skills and technical skills that will help them in any future endeavor they take part in,” Scott said. “The ability to identify a problem and solve it are essential in any facet of life for these kids.”

It is unclear how many of Scott’s students will go on to pursue a career in robotics, but the experience has certainly made a lasting impact.

“Robotics opens up many doors for me and a lot of other people,” Prudhivi said. “It not only teaches you technical aspects, but it also teaches interpersonal skills which are definitely needed in the future.”