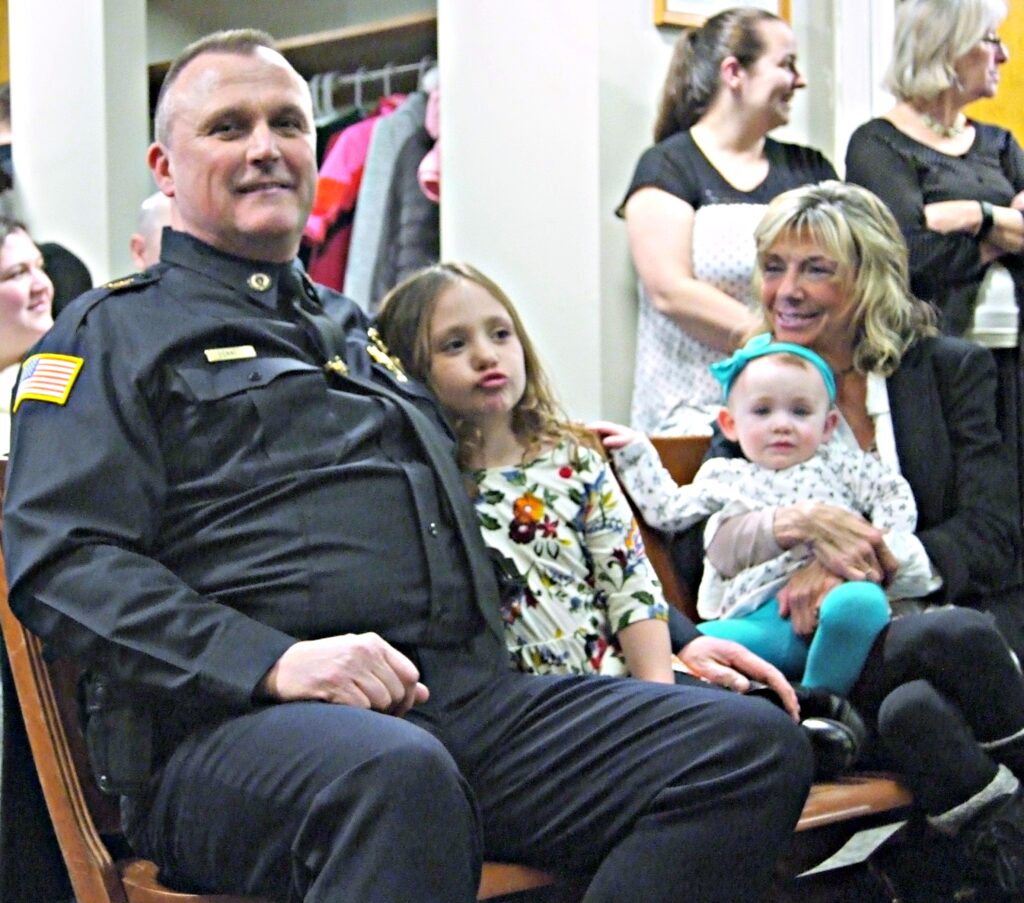 Joseph Bennett sits with his wife, Wendy, and grandchildren, Hopper, 5 and Mable, 2, at the March 5 Select Board meeting, when he was named deputy chief. FILE PHOTO/JIM KLEINKAUF

Joseph Bennett was named the town’s new police chief during Tuesday night’s Select Board meeting, pending agreement on a contract.

Bennett, the deputy chief and a 25-year veteran of the force, has been serving as interim chief since Edward Lee’s last day on the job, which was Friday.

The position was posted internally after Lee submitted his resignation and it was accepted late last month. Town human resources director Maria Casey and assistant town manager Elaine Lazarus vetted the four candidates and determined that two exceeded the minimum requirements, having the education, the requisite number of years in law enforcement, and supervisory experience: Bennett and Lt. John Porter.

Following a round of interviews, Bennett received the panel’s recommendation due in part to his experience with direct department budgeting, his role as the HPD’s public information officer, and his completion of a master’s degree from Western New England College, Casey explained.

The Select Board voted 5-0 to accept the panel’s recommendation and enter into contract negotiations with Bennett to become chief.

Select Board chair Brendan Tedstone said he was pleased to be “promoting somebody from within who will take us to the next level.”

Tedstone added that Bennett will decide if he wants to nominate a new deputy chief to replace him or structure the department differently.

Also at Tuesday’s Select Board meeting, the board voted to postpone the Annual Town Election to June 29 due to the COVID-19 pandemic. The Democratic town caucus, originally scheduled for April 10, was moved to May 14, and the Republican town caucus was shifted from April 9 to May 15.

At a meeting last month, the board moved Annual Town Meeting from May 4 to June 22.

Another topic of discussion during the meeting was the potential for runners to show up on April 20, the original date for the Boston Marathon, in hopes of running the course. John Coutinho, the Select Board’s liaison to the Boston Athletic Association (which organizes the race), said he gave assurances that Hopkinton would do its part to discourage runners. He suggested road closures and a strong police presence. The rest of the board was hesitant to approve closing roads, but there was unanimous support to have parking restrictions and police to keep runners away from the starting line.