Robotics teams head to world competition in May 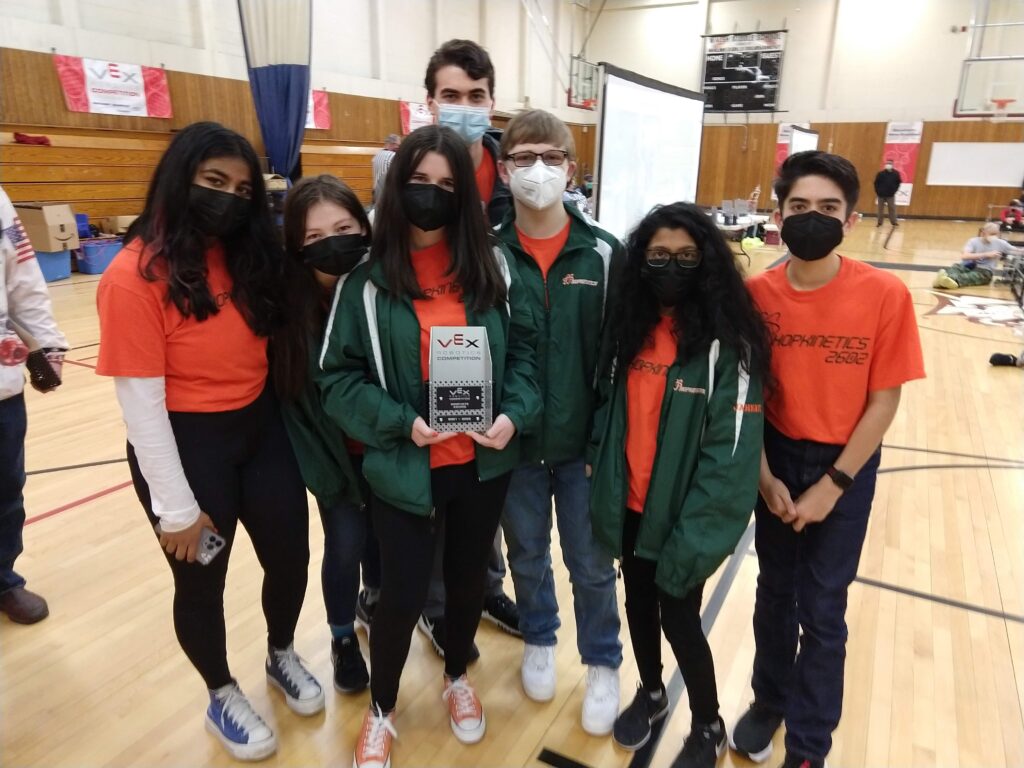 Members of the Hopkinton High School robotics program show off their trophy from a recent competition.

Jahnavi Prudhivi, a senior at Hopkinton High School and member of Robotics Team 2602H Hydra, said it is exciting to anticipate talking to judges about the process of transforming “just a bunch of metal pieces into a fully functioning robot.”

“We’ll reminisce about the times we struggled and when we succeeded. … Or when we encountered failures and how we got through them,” Prudhivi added.

Prudhivi is just one Hopkinton student out of 26 on four teams who will compete in Dallas from May 4-8 at the VEX Robotics World Championships. The students earned the honor by qualifying at local and regional events. The competition revolves around the “Tipping Point” game played on a 12-by-12-foot square field and attracts thousands of participants from Europe, Asia, the United States, Canada and more.

Doug Scott, the business/technology/engineering subject matter leader for Grades 6-12, is thrilled the kids will be able to showcase their work in person after COVID-19 meant scaled-back remote events over the past two years.

“This year the kids have a chance to shine and enjoy the rewards of their hard work,” Scott said.

The school district chose to keep the robotics programs alive at the middle and high schools during the pandemic despite having to work within constraints.

“It was a major commitment for the students and teachers,” Scott noted. “I’m happy to see the kids get to get back to some sense of normalcy after a couple of years.”

Two of the high school teams qualified through Google’s community service category, while two others scored high in the regional skills rankings at the Southern New England qualifier.

Sophomore Rithika Kilari, a builder and documenter on Team 2602 Jaguars, explained that the Google challenge involves using robotic skills and resources to make significant contributions to the community.

“Our goal is to spread awareness about STEM [science, technology, engineering and mathematics] around the globe,” she said. Activities included hosting a “girl powered” event featuring different stations such as rocket building and 3D pens.

In addition, team members conducted interviews to learn about STEM education in other countries. They followed up by teaching physics to underprivileged kids in India and working with the nonprofit Prepare to give chemistry lessons via Zoom, among other more localized activities.

Kilari said that communication is the most important skill teams learn. “Everyone has their own ideas and schedules, and finding compromises for things ranging anywhere from what changes to make on the robot to what time to schedule meetings has become so common that I know I’ll be able to use that skill in any group environment,” she said.

Senior Treavor Weeden of Team 2602F said “patience and determination” helps him to focus during competitions and stay on task, while several students talked about the friendships they made and the importance of teamwork as highlights of participation.

Prudhivi, a programmer and builder, cited memories of competitions and awards as special but also recalled a robotics sleepover when team members went outside at 3 a.m. to hike together.

“I’ve gained lifelong friends and met people from all over the world that have similar interests as me,” Prudhivi said.

Sophomore teammate Disha Mudenur said that learning to collaborate and be organized are even more important than acquiring building skills.

“There are many moving parts, and having a good team dynamic is so essential to function as a team,” Mudenur said.

Mudenur is looking forward to meeting other students, watching their approach to the competition and especially figuring out how to communicate with competitors who speak other languages.

Part of the robotics experience, Mudenur added, includes helping and mentoring teams at the middle school and hosting a high school helpline so the younger kids can ask questions. 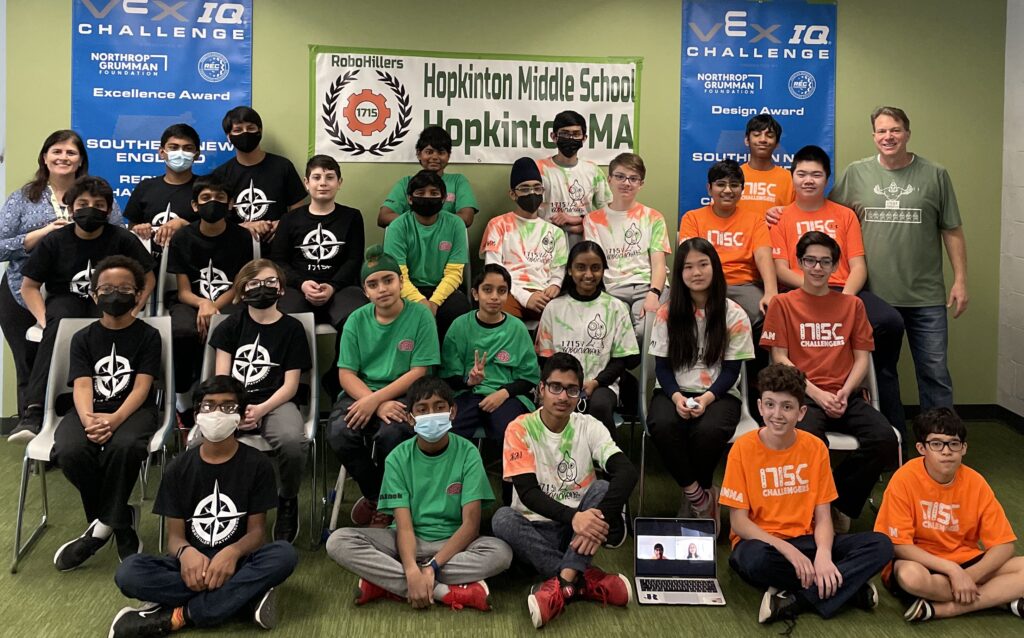 Hopkinton Middle School is sending four teams to the world competition in Dallas.

In addition to the high school qualifiers, Hopkinton Middle School also will be sending four teams comprised of 30 students to compete in the VEX IQ program in Dallas from May 8-10.

Coached by Patricia Allen, media literacy and guidance seminar teacher at HMS, the teams are assisted by parent volunteer John Fitzgerald. The HMS competitors also had to design, build, and program a robot to play a game called “Pitching In” at the Worlds.

Like their older counterparts, the HMS robotics teams have had a history of success at the global event. Last year, Allen noted, the RoboHiller Titans 1715T won a middle school excellence award, which is the highest honor a team can earn.

This year, the RoboHiller Big Brains 1715B won an online STEM research project for their Biomimicry in Engineering submission and will accept their trophy at VEX Worlds next month.

Only 15 awards are given out globally, Allen said, and they also earned a design award at regionals, making them a double qualifier.

Being a member of the robotics teams takes a lot of time commitment. The high school kids meet five days a week for the full school year and sometimes outside of school as well.

The middle school students meet on Thursday afternoons, but closer to competitions they often meet three more times per week, according to Allen.

Sixth-grader Shrivas Kumar of the RoboHiller Big Brains noted, “I look forward to the problems we will face, the satisfaction from solving them and the friends we’ll make,” during the process.