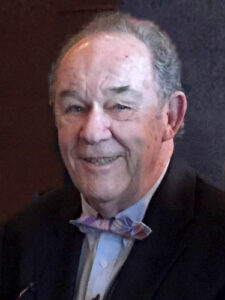 Ronald (Ron) A. Nordstrom, 82, of West Boylston, died Sept. 10 with family at Rose Monahan Home after a long period of declining health.

Ron is survived by his wife of 57 years, Barbara (Nelligan) Nordstrom, his three children, Beth Keach and her husband, Steven, of Merrimack, New Hampshire; Kerry Giza and her husband, Jim, of Sutton; and James Nordstrom and Susan Whitney of Dennis.

Born in Worcester, the only child of Arthur R. and Karen (Madsen) Nordstrom, Ron graduated Major Howard Beal High School. He attended the University of Miami on a football scholarship and graduated from Worcester Junior College. Ron loved his Corvettes. He had a competitive spirit and was an athlete. He also enjoyed singing.

He was entrepreneurial from a young age and had multiple childhood business endeavors. He worked most of his life in construction. He realized his dream when he moved to Cape Cod and founded R&J Concrete of Harwich, until a serious neck injury rendered him disabled. He was a sales rep for dance and exercise wear for 10 years. In 1991 Ron and son-in-law Steven started Keach-Nordstrom Associates in New Hampshire. Ron retired back to Cape Cod in 2005.

As Ron’s health declined, he returned to Central Massachusetts to be closer to family. He enjoyed being a part of the cribbage group at Angell Brook Village of West Boylston.

In lieu of flowers, memorial donations may be made to the West Boylston Fire Department, Rose Monahan Home or a charity of choice. To view an online memorial or leave a message of condolence, go to phaneuf.net.