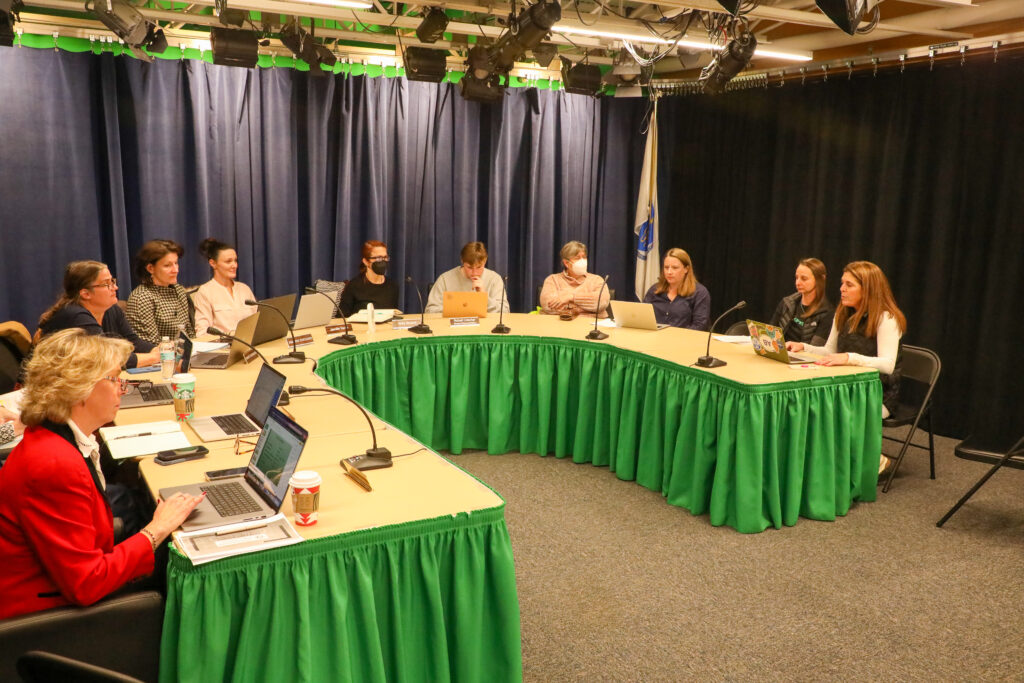 Director of Finance Susan Rothermich led a presentation about a proposed $60 million school operating budget, noting an 8.1 percent increase (approximately $4.5 million) over this fiscal year. Most of that increase, nearly $3 million, is in salaries.

Other major impacts in the budget come from out-of-district tuition, where there is an allowance for a 14 percent increase, and in transportation costs, with a new contract and an additional bus. The rising costs of utilities and inflation also are factors.

Rothermich noted that schools are a service industry, with salaries comprising about 80 percent of the whole budget.

Superintendent of Schools Carol Cavanaugh acknowledged the Select Board advised departments to develop budgets with a 5.1 percent cap.

She reviewed the data showing proposed cuts in the speech, occupational and physical therapy hours — noting that the $168,000 savings there is “tentative.” Cavanaugh added that she will be meeting with the therapy providers in the coming weeks so they can provide more information on how their time is spent.

Cavanaugh also talked about adding special education (SPED) directors, saying it is “a false narrative,” to think the therapists’ hours are being sacrificed to pay for the administrative roles.

The superintendent outlined MCAS scores, showing that students with disabilities are not “keeping pace” with their peers in like districts and in Hopkinton.

She said the proposed administrators would be “boots on the ground” to analyze the curriculum, make accommodations and see where improvements are needed in instruction. Cavanaugh said she realizes teachers, therapists and support staff are “always working harder,” but she wants to see if there is a smarter way to work to deliver services.

Rothermich outlined a revised capital plan for FY24. Among the changes since her last presentation was the splitting up of funding requests for the Hopkins School addition and high school track and Field 3 replacement into phases: design and construction.

The division means that Town Meeting in May 2023 and May 2024 would vote on the Hopkins addition — for example, first at $3 million for concept and schematic designs, design development and construction documents and permitting — and then $29 million-$33 million for construction depending on the grade level solution and final additional size deemed appropriate for programming.

Rothermich noted the track project is to increase safety, equity and access for students and the community, adding the present track is at the end of its useful life, with base layer deterioration.

The track project also would allow for more use and seating capacity at events, she has said.

Under the plan, voters at the May 2023 Town Meeting will decide whether to appropriate $1 million to expand the playground. Rothermich said it was built for 395 students, while current enrollment is 592.

Rothermich has said previously there may be Community Preservation grant funding available to help pay for the track/field work, and an application has been submitted.

Following the presentation, School Committee vice chair Amanda Fargiano thanked the administrators for the data on MCAS results, saying it “raises some red flags.” She noted they have to find ways to successfully serve students who are falling behind.

School Committee member Holly Morand outlined her concern about per pupil expenditures going down, saying the district would see student outcomes impacted. She said the district is “putting band-aids and plugging holes,” and it will come to a point where it will not work anymore.

School Committee member Jennifer Devlin urged not “to get caught up in quantitative data” and instead listen and hear stories from an operational standpoint in order to get the whole story.

Select Board member Muriel Kramer said the town would not be able to survive financially with all departments having an anticipated $300 million or more ask for capital expenditures over five years, as the town manager indicated at Tuesday’s Select Board meeting.

She “implored,” the School Committee to look at its budget differently “so we don’t choke the life out of our own financial future but also out of the rest of the departments.”

Kramer encouraged the superintendent to speak with parents about the therapy reduction issue. She said proposed SPED administrators are a “hard sell,” and she would rather invest in the people who are working directly with the kids.

Other Select Board and Appropriation Committee members spoke about postponing some requests, spreading them out over time or exploring creative funding methods such as naming rights.

School Committee chair Nancy Cavanaugh noted, “The budget has work to be done all around. We’re committed to rolling up our sleeves and collaborating with you.”

In other business, the School Committee voted to approve the Elmwood School Education Plan for submission to the Massachusetts School Building Authority (MSBA).

Representatives from Perkins Eastman last week noted the draft document is a preliminary design program (PDP) submission — that is “a road map for how the district teaches today and tomorrow.” They described it as a “starting point,” of the architectural programming for the designer.

The plan instructs on how the district wants to use the building to educate its students and covers topics like how the gym and cafeteria fit in, and how features like SPED, visual arts, media center/lab, food service, transportation and numerous other programs are structured.

During the public comment portion, once again several people spoke in favor of keeping the hours for speech, occupational and physical therapy intact. Special Education Parent Advisory Council liaison Jen Halliday referred people to a facebook site (NoSPEDcuts Hopkinton Ma) where there is an online petition as well as yard signs available.

“Every taxpayer should know about these proposed cuts,” she said, “and the potential future consequences, both financial and ethical.”