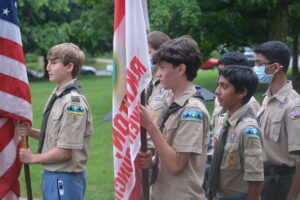 Members of Boy Scouts Troop 1 serve as the honor guard for a Court of Honor session at the Town Common in June. PHOTO/JAMES GERSHWILER

World War I, the 1918 flu pandemic, the Great Depression, World War II — the Boy Scouts of America have been in Hopkinton through it all. Formed in 1916, Hopkinton Troop 1 is said to be one of the longest continuously chartered troops in the country.

But enrollment in Scouting programs has taken a hit during the COVID-19 pandemic, as has been the case for many organizations. Troop 1 leader Karen Thayer Bograd is hopeful the Scouts will persevere as they have for more than a century. “We’d hate to see these programs drop off, because they do provide so much for the kids,” Thayer Bograd said.

Thayer Bograd is a member of the Hopkinton Scout Leaders Association, an umbrella organization formed in 1949 to support Scouting for girls and boys in Hopkinton. She has been a Boy Scouts den leader for 10 years, and she also spent 13 years with the Girl Scouts of Eastern Massachusetts.

The Girl Scouts of Eastern Massachusetts, a separate organization, also is active in the area and oversees the Girl Scouts of Hopkinton program for youth in kindergarten through 12th grade.

While Cub Scouts generally is parent-led, Scouts BSA is led by the youth themselves, who vote on both their leaders and activities. From campouts to skills workshops, community projects and historical site visits, “giving kids the big picture of the world” is one of the main objectives, Thayer Bograd said.

This fall, Scouts BSA has several activities on the docket, including trips to the Herkimer Diamond Mines and Howe Caverns (both in New York). They’ll also be hosting a Christmas tree fundraiser and participating in Scouting for Food, a joint venture with the Cub Scouts and Girl Scouts that supports the local food pantry.

Additional plans for the Girl Scouts include participating in a community Trunk or Treat Halloween event, working on a Center Trail bee garden and “kindness rock” garden, hosting a service project benefiting seniors and launching their annual cookie sale.

For all ages, Thayer Bograd says that the outdoor component of the programming is key “in a world where things are so technology-driven. It’s great to have these programs that say, ‘To achieve this, go outside and do this.’ ” With COVID-19 restricting indoor meetings, the Scouts used many more outdoor spaces throughout Hopkinton this past year, including the Town Common, Hopkinton State Park, Fruit Street facilities and school parking lots. If it was dark, kids brought along headlamps; if it was cold, they bundled up. “As a group, we’ve all had great experiences using local amenities,” Thayer Bograd said.

Seeing kids achieve their goals and reach the pinnacle levels of Eagle Scout (Scouts BSA) and the Gold Award (Girl Scouts) is one of the most rewarding parts of the experience for Thayer Bograd, but the everyday, quieter accomplishments are remarkable as well. Thayer Bograd recalled one Cub Scout who was referred to the program for help with socialization; the goal was simply for him to meet and know his peers. “By the end of the year, he knew 12 more people,” she said.

Scouting “can help bring you out of your shell … especially in Hopkinton where we have grades that are so huge,” Thayer Bograd explained. “If you’re young, it can be overwhelming. … The Cub Scouts program breaks it down a little smaller.”

Families who are interested in enrolling can find information for the Boy Scouts of America at beascout.org and the Girl Scouts of Eastern Massachusetts at gsema.org.