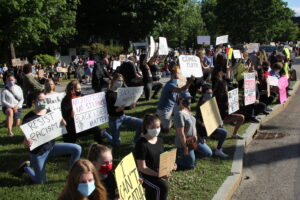 Protesters kneel during a moment of silence at the Town Common on Sunday night. PHOTO/JOHN CARDILLO

Ilana Casady rose from a moment of silence with a tear-stained face mask. Her emotions were raw.

It’s those kinds of feelings that led residents like Casady to gather on the Town Common Sunday for the second week in a row to join the national wave of protests sparked by the death of George Floyd in Minneapolis two weeks ago.

“Everyone was asking will we have another [protest], and I was asking that,” said Carly Grant, one of the organizers. “Then I thought, why don’t I just start it?”

When Floyd died after being restrained by Minneapolis police — including one officer who kneeled on his neck for almost nine minutes — public anger quickly spread, sparking a now-global Black Lives Matter protest movement.

After an informal vigil last Sunday drew 200 demonstrators to the Town Common, organizers worked to build on the momentum.

They found others ready and willing to join the movement.

“It’s not enough to just say, ‘Oh, that’s so bad,’ ” Grant said. “Because then you’re part of the problem. I wanted to be part of the solution.”

Some protests, including ones as close as Boston and Brockton, have devolved into violence due in part to tension and escalation between police and demonstrators. In the immediate area, however, gatherings have stayed peaceful, rarely even drawing a substantial police presence.

Such was the case Sunday as things stayed quiet despite a dense crowd that was estimated to be around 400. Chief Joseph Bennett was one of a few Hopkinton police on hand, dressed casually and greeting attendees with smiles.

“There should be more love,” Casady said of the current political and cultural situation as a whole. “It’s easy to say, but there shouldn’t be so much hatred in the world. We just need to all love each other a little more so that society can be fair to people.”

At one point during the demonstration, organizers called all present to kneel in memory of people like Floyd who have been killed by police.

Across the street, a home PA system blared Christian rock music that could be heard across the Town Common.

Throughout the event, informal circles of conversation emerged as locals openly discussed the current situation.

Two weeks after the death of Floyd and one week after the first protests cropped up in the suburbs, Hopkinton advocates are excited about what they’ve accomplished.

Now those advocates have their eyes turned toward sustaining this political will for change.

“I worry about what happens after all this dies down,” Grant said. “It’s really important to not become complacent and move on and forget about it. I hope this does not end here. I hope it evolves.” 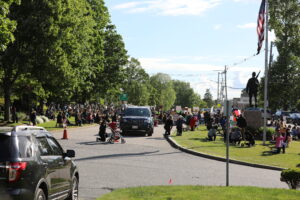 The crowd at Sunday’s protest was estimated to be around 400. PHOTO/JOHN CARDILLO 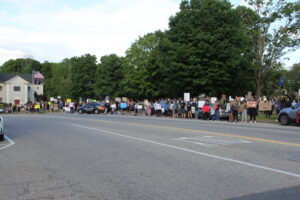 Protestors line Main Street along the edge of the Town Common. PHOTO/JOHN CARDILLO 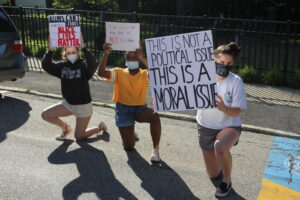 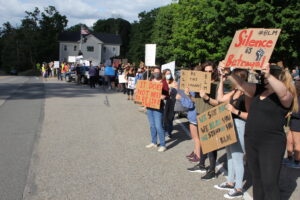 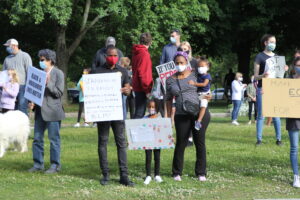 Supporting the cause was the Barry family (from left), Djouma, Binta, Hawa and Fatima. PHOTO/JOHN CARDILLO 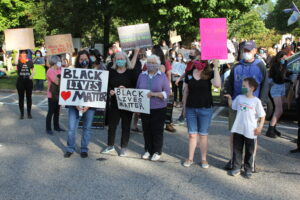