Select Board dilemma: Rush into RECC or risk waiting? 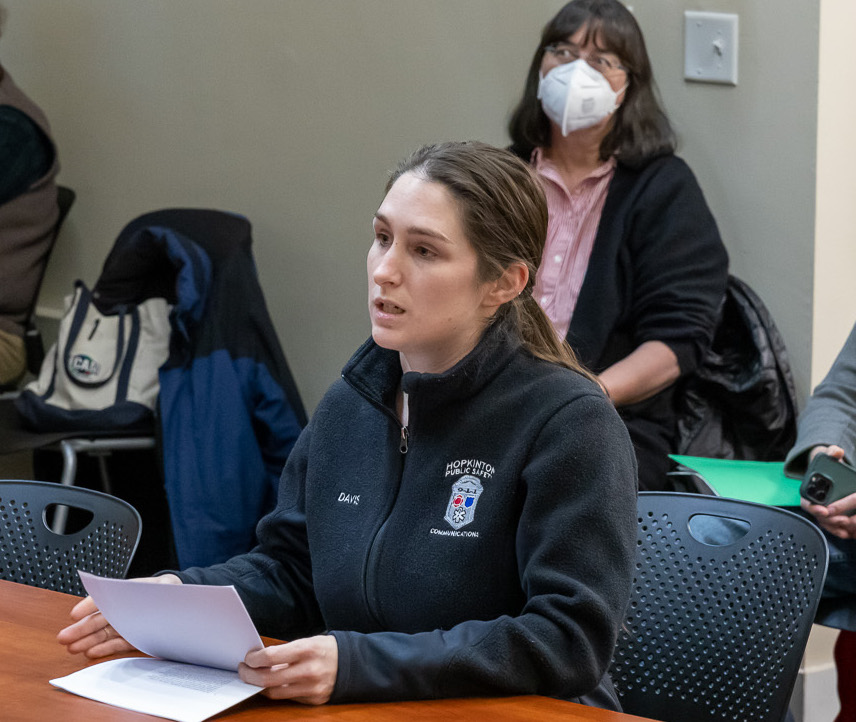 Select Board members on Tuesday continued to show hesitation regarding a proposed regional emergency communications center (RECC), but there also was concern about missing an opportunity to have a say in where Hopkinton ends up and what the RECC looks like.

A proposed intermunicipal agreement (IMA) dated Jan. 19 was shared. The district would include Hopkinton, Grafton, Southborough and Westborough.

Town Manager Norman Khumalo, who previously suggested that town voters would get a chance to decide, said due to a change in the law, the Select Board has the final say on whether Hopkinton joins the district.

That news was not well-received by board members nor those in the audience, many of whom spoke out against the RECC during the public forum at the start of the meeting.

The deadline for Hopkinton (and the other towns) to sign the IMA is Feb. 14, and some board members said that did not provide enough time, especially with many questions still unanswered. The deadline was set by the towns, as the state has a deadline of March 5 to be considered for grants.

“As much as we’re trying to be transparent, we’re not because we don’t have enough information,” board member Shahidul Mannan said. “You’re saying it’s economically beneficial, but our data doesn’t support it, and we don’t have any clear new data to really establish the argument. I can see why it can be confusing.”

Khumalo said the only economic benefit that can be identified at this point is potential grant funding, adding: “I have never said this is economically beneficial to the community.”

Board members expressed a desire to find a way to give residents the chance to be heard — perhaps via an online survey.

The RECC headquarters would be located in Westborough, with a former superfund site identified as the likely home.

The IMA spells out how the RECC would be governed. Regarding staffing, some current dispatch employees noted a line in the IMA that stated: “The aggregate staffing level of the district and RECC may be set at a number of employees that is no less than the cumulative total of those persons employed by the participating communities existing 911 dispatch centers.” The Hopkinton employees asked that the word “may” be changed to “shall” in order to ensure they don’t lose their jobs.

Responded Khumalo: “The language that you see that uses ‘may’ was arrived at after negotiation. I don’t believe we will have success in asking for ‘shall.’ We did. We ended with ‘may.’ ”

Khumalo explained that the district can only provide the RECC’s executive director a guideline for how the institution will be staffed, not order the director how many people to hire.

The IMA states that a town wishing to withdraw from the district would have to satisfy its financial obligations and then go through a five-year withdrawal process.

A study by the Collins Center estimated Hopkinton would have a projected recurring cost savings of just over $480,000 along with an additional one-time savings of over $460,000 in the first year. However, the state’s letter noted that a number of factors affect the final cost projections.

Mannan expressed disappointment that the letter could not be more clear about potential savings, perhaps listing an average for the towns currently in a RECC.

“We don’t have data to compare?” he asked. “How can that happen?”

As for the Collins Center report’s conclusion, “The numbers just don’t add up,” Mannan said.

One of the biggest concerns raised by the public and Select Board members is having an unstaffed Hopkinton Police Station at night. Town officials have said they would not allow that to happen, but that likely would lead to additional costs.

“All this coming together, it’s not making a lot of economic sense.” Mannan added.

Select Board chair Amy Ritterbusch acknowledged that “it does feel rushed” having to make a decision by Feb. 14, but she worried that passing could lead to future problems.

“If we don’t make the choice, the RECC will go ahead with the other towns,” she said. “And at some point in the future, this is the unknown, we don’t know if the state will say all the towns cannot operate their 911 centers, they all have to join with another, and we will have lost that control to form the kind of district we want to be in.”

Ritterbusch also wondered if Hopkinton’s current dispatch staff members might have higher odds of landing jobs with the RECC now rather than later.

“I feel like we might have a better chance of getting more of our staff members if we join this RECC center than if we wait and see — the other centers might be all staffed if this goes on without us,” she said. “It’s hard to know what would be the right decision for our employees.”

Board member Muriel Kramer said she is no closer to determining her final opinion, although, “What seems obvious is that this is the wave of the future and we’re going to have to make this decision at some point.”

Shannon Casey, a Hopkinton dispatcher, was one of a handful of individuals who spoke during public comment and raised concerns about the RECC.

Casey and fellow dispatch employee Kiley Davis said some of the Q&A answers posted on the town’s website had incorrect information.

They received support from board member Mary Jo LaFreniere.

“I don’t really like losing our autonomy to three other towns who, for various reasons, could vote against us on anything that we want,” LaFreniere said. “Something about this just bothered me that we have such a good, good, good department right now. I find there’s still problems, there’s still questions. I’m not crazy about this agreement myself.”

Added LaFreniere: “I would rather take the chance that we don’t get to have the input in the beginning of the program and that we can join later, at another time, and that we do this right, and that the whole town is behind us. I just don’t see why we have to rush, rush into this.”