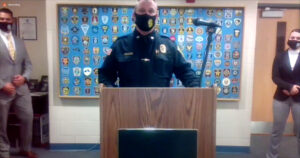 Firth worked as a part-time dispatcher in Hopkinton for almost three years. In the fall of 2019 she began working full-time as a dispatcher for the Ashland Fire Department. She is a spring 2019 graduate of Framingham State University’s honors program with a bachelor’s degree in criminology and a minor in psychology.

Wright holds a bachelor’s degree from Fitchburg State University and a master’s from UMass-Lowell. He served in the Army for about eight years, including a peacekeeping mission in Egypt, then worked as a campus police officer at the College of the Holy Cross.

“Tonight we celebrate the formal beginning of what promises to be a long career of dedicated service to our community,” Police Chief Joseph Bennett said, adding: “Beyond intellect, knowledge, training and education, these candidates possess the values that we treasure in our Police Department and in our community.”

Town clerk Connor Degan administered the oath of office to both officers.

The Select Board approved Town Manager Norman Khumalo’s request for an exception from the hiring freeze to fill the vacancy for a senior library assistant.

Library director Heather Backman joined the meeting to say the library is looking to expand its hours, including adding restricted hours for immunocompromised/at-risk individuals.

“As we are looking at expanding hours we’re also feeling pressure to expand services in other ways,” she said. “The fact that we have staff covering for this vacant position, some kind of core work that we really can’t just drop, means that we are struggling to meet the level of demand the community is asking for us to support them, to be as much as we can that community hub during this challenging time. That’s why we are seeking this exemption.”

Added Backman: “Part of the purpose of adding this is to enable us to add and sustain greater open hours, with the staff being able to do that in the longer term. We’re pushing to do as much as we can, but it’s becoming a strain on people to get it all done, and we want to do the very best we can by this community. We have a lot of need out there.”

Khumalo said the Massachusetts Department of Transportation has yet to announce the winning bidder for the Main Street Corridor Project, but he anticipates an announcement soon. …

The board approved Khumalo’s request to waive the license issuance fees for restaurants and establishments that serve alcohol, with the exception of package stores. …

The board approved the Woodville Rod & Gun Club’s change in manager to Karen Remillard. …

The board approved the acceptance of a $50 gift to the Ambulance Fund in memory of Joseph L. Donovan from Hopkinton residents Richard and Janet Stewart, and a $100 gift to the library from the Hopkinton Women’s Club.