At Tuesday’s Select Board meeting, members took a moment to express condolences following the passing of Rebeka Hoffman, who had served on multiple town committees and was a substitute teacher in the local schools.

Hoffman, 68, died June 11 after a one-year battle with cancer.

Last month, Hoffman was reelected to the Housing Authority. A 33-year Hopkinton resident, she also was vice chair of the Sustainable Green Committee.

“She was always dedicated to the cause, very passionate,” Select Board Member Shahidul Mannan said. “She will be remembered for a long time. It’s very sad.”

Big jump in water rates ahead

Town water user fees will increase 9.5 percent for fiscal year 2023 due to projected capital costs approved at last month’s Town Meeting, while sewer rates will decrease 5.0 percent due to a projected substantial surplus in the Sewer Enterprise Fund.

The town’s chief financial officer, Tim O’Leary, explained that the average residential water bill would increase from $287 to $314, a jump of $27. He also cautioned that next year could bring an even higher increase based on cost projections for the Massachusetts Water Resource Authority (MWRA) connection that was supported by Town Meeting voters due to the town’s PFAS problem.

Even if the state waives the MWRA connection fee and the town is able to get grants to cover a portion of the connection costs, O’Leary said rates are going to continue go up substantially.

“The cost of purchasing the water [alone] is going to be enough to almost double the cost of our water bills when we go to the MWRA,” O’Leary said.

The board also filled a number of other committee vacancies.

Khwaja Ehsan and Jack Nealon were appointed to the Affordable Housing Trust Fund Board.

Michael Riley, Walter Garland, Arnold Cohen, John Mosher and Sudheer Beedanagari were appointed to the Board of Appeals.

Ken Weismantel was reappointed to the Community Preservation Committee.

Ed Harrow and Melissa Recos were reappointed to the Conservation Commission.

John Palitsch, Donald Wolf and Stacey Schmidt were appointed to the Council on Aging.

John Cardillo and Michelle Leibowitz were appointed to the Cultural Council.

Colleen Charleston and Carole Nathan were reappointed to the Marathon Fund Committee.

Michael DiMascio and Robert Scott were appointed to the Permanent Building Committee.

Scott Knous and Jane Moran were appointed to the Upper Charles Trail Committee.

Linda Muri and James Mirable were appointed to the Veterans Celebration Committee.

The board accepted the resignation of Meena Kaushik from the Sustainable Green Committee and the Hopkinton Cultural Council. Kaushik is moving out of town.

Board members acknowledged both Kaushik and her husband, Sundar Sivaraman, who were very active in town.

“Both Sundar and Meena have served this town beautifully and we really appreciate their service,” Select Board Member Muriel Kramer said. 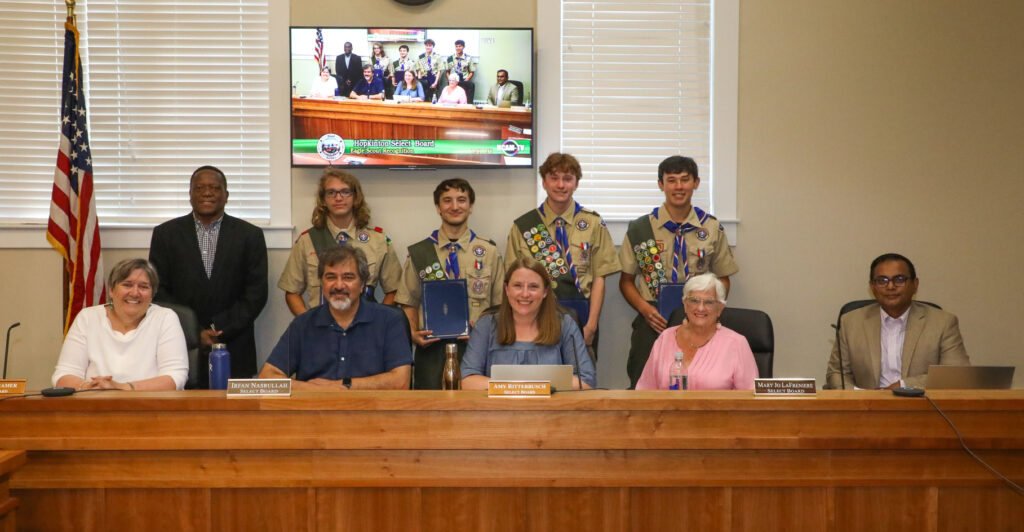 Bograd installed five informational signs at the sites of old stone foundations on trails in town.

Davan built and installed 25 trail signs throughout town advising hikers of the presence of ticks, with tick identification cards and brochures with information about tick issues.

Kimball installed wooden bridges and puncheons over wet areas of trails on the Hughes property off Hayden Rowe Street.

Cambourelis-Haskins created a flagstone garden park with plant identifiers at the Hopkinton Center for the Arts. He also created a website with a map and description of the garden.

Dolski wrote and produced a video public service announcement to raise awareness around mental health and the jail diversion program the Hopkinton Police Department has been using for the past few years.

Town Manager Norman Khumalo said he will share results of a survey about Town Meeting at the next Select Board meeting, and he offered a quick preview. He said there were 434 respondents to the survey, and while 98 percent of them identified as registered voters, 77 percent of them did not attend any night of last month’s Town Meeting. The length of the meeting was the top reason for people choosing not to attend. …

The board gave high ratings to the town manager, police chief and fire chief during their performance reviews and set goals for the coming year.