In order for Hopkinton to gain access to the Massachusetts Water Resources Authority water supply, it will have to go through Southborough. And that will come at a cost.

As part of a proposed letter of intent, Southborough would want all direct costs to be covered by Hopkinton — establishment costs, management, legal, design, design review, construction, supplies and operation/maintenance, and electricity.

Southborough also wants compensation for the impact on its town, construction cost coverage (including complete road resurfacing), reimbursement for long-term operations and maintenance of the water system, and $1 million in compensatory cost for unrelated water improvement projects in its town.

Hopkinton’s legal department was to look at the agreement, but Select Board chair Amy Ritterbusch noted that Hopkinton is to some degree at Southborough’s mercy.

“At this point they are the only option,” Khumalo said.

Southborough would need to take its agreement to its Town Meeting in March.

Hopkinton’s Town Meeting is May 1, at which time residents would be asked to weigh in on the proposal. Hopkinton voters last year supported the decision to connect to the MWRA supply after PFAS were detected in the town’s water.

On a related note, Khumalo reported that the town’s PFAS water treatment project now is anticipated to cost $1.2 million — twice the amount that was approved at last year’s Town Meeting.

Khumalo said the original plan was for a design-build, but because of the procurement process the town “took a different option.”

He noted in a letter to board members that the Massachusetts Department of Environmental Protection recommended that the filtration design should ensure that the backwash system has enough chlorine to treat and eliminate any bacteria in the system.

He said the filtration can be installed, but an additional component is on hold.

Department of Public Works Director John Westerling said one option could be to seek American Recovery and Reinvestment Act (ARRA) funds to cover the differential. Otherwise, there would need to be an additional Town Meeting vote for the additional funds.

Westerling and Joe Baldiga, chair of the Lake Maspenock Weed Management & Control Advisory Group, appeared before the board to discuss a proposal to use herbicides to address the weed problem in Lake Maspenock.

Westerling explained that a lake drawdown is currently in effect, but due to the mild winter, the weeds are not getting killed off as a hard freeze has not happened. He proposed using herbicides this spring.

“North Basin is getting just awful — horrible, horrible,” he said.

The DPW received approval from the Conservation Commission last year to use a variety of solutions, including herbicides — which the town previously had rejected.

“We are back again recommending herbicide,” Westerling said. “We think the lake is getting worse.”

He indicated that treatment would be applied only to sections of the lake.

“We’re not blanketing the lake,” he said, “just specific areas where we know the problems are worse.”

No vote was asked for or taken by the board, which generally supported the decision.

Muriel Kramer said she would not stand in the way, but she was apprehensive about herbicides.

“It is very hard for me to be enthusiastic about herbicides just knowing how hard it is to know that they are safe over time,” she said, adding: “I can’t help but say it concerns me to use herbicides. However, I do trust that a lot of work and consideration and thought and research is going into this.”

Ritterbusch concurred, noting that this option was a “last resort.”

Members of the Sustainable Green Committee appeared before the board to provide an update on its proposed climate action plan.

The committee recommends a net zero resolution for this year’s Annual Town Meeting.

Sustainable Green Committee chair Geoff Rowland noted some of the committee’s work, including its efforts to develop a greenhouse gas inventory to assess Hopkinton’s carbon emissions.

Rowland noted that Hopkinton has an advantage in that the town does not have as much commercial development as many other similar towns, there is more green space in town, and there is more relatively newer construction that meets later standards and would require less work to improve.

As part of the resolution — which would be a non-binding proposal — appropriate town boards, committees and departments would report their net zero plan to the Select Board by the end of calendar year 2024. Additionally, bylaws would be reviewed to see if there were any changes that could be made to help reduce emissions.

The committee also suggested raising money to establish a “green fund” to help moderate income residents transition to more efficient technology, and suggested exploring options to obtain energy from a cleaner source — rather than Eversource, the town’s current provider. 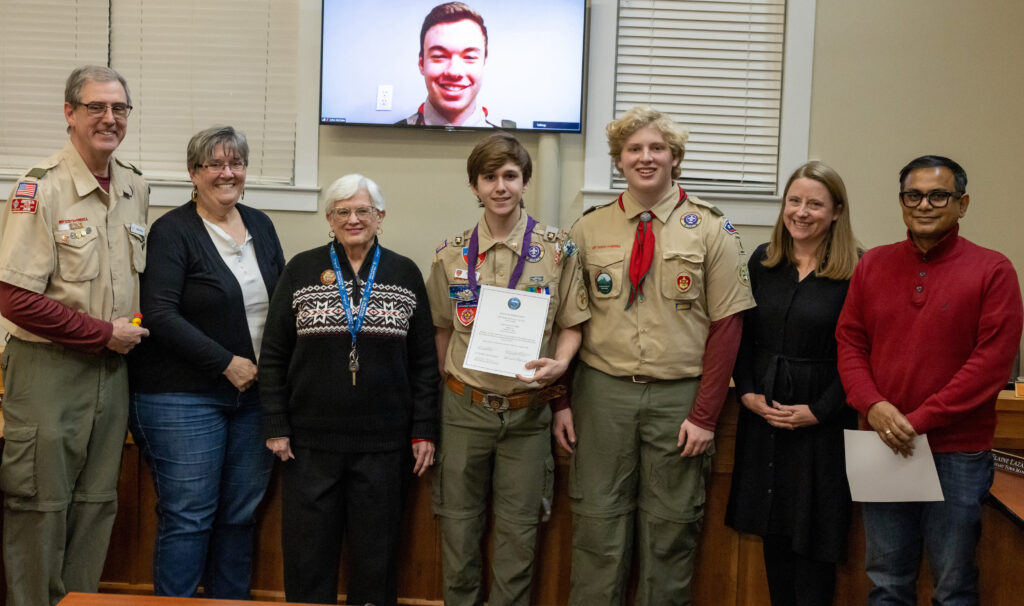 The board honored three Eagle Scouts and discussed their community projects.

Kyle Fischesser, working with Hopkinton Little League, constructed warmup pitching mounds and home plate areas on the side of each field at EMC Park that will be ready this spring season.

“I played baseball my whole life and I played in Little League, so this was a great chance for me to be able to give back to them,” Fischesser said.

Chris Holly built a large shelter at the Baypath Humane Society to protect the dogs and allow for more use during the summer and winter seasons and during inclement weather. The shelter replaced a previous one that had fallen into disrepair.

“I was trying to find a project that I was passionate about,” Holly said, noting his family has some dogs.

Dan McCabe refurbished a prayer garden at St. Matthew Parish in Southborough, working with a landscaper to install a new stone wall and new plants.

“Both my brothers had done their Eagle Scout projects there, and I wanted to give back to the church as well,” McCabe said.

Anna Rogers, who has worked for the town for 17 years and had been working as an inspection administrative assistant, was promoted to environmental and inspectional services coordinator in the Land Use, Planning and Permitting Department.

Board members expressed their condolences following the deaths of longtime residents and volunteers Mary Harrington and Doris Carver.

“I learned so much from Mary,” Kramer said of the former Select Board chair. “She always had a driving passion for Hopkinton at the heart of everything that she did.”

Regarding Carver, Kramer said: “I could always count on Doris in particular to keep my thinking straight on any topic. She was very direct and very friendly and very invested and she also had a tremendous fun-loving spirit. She was an amazing contributor to the community.”