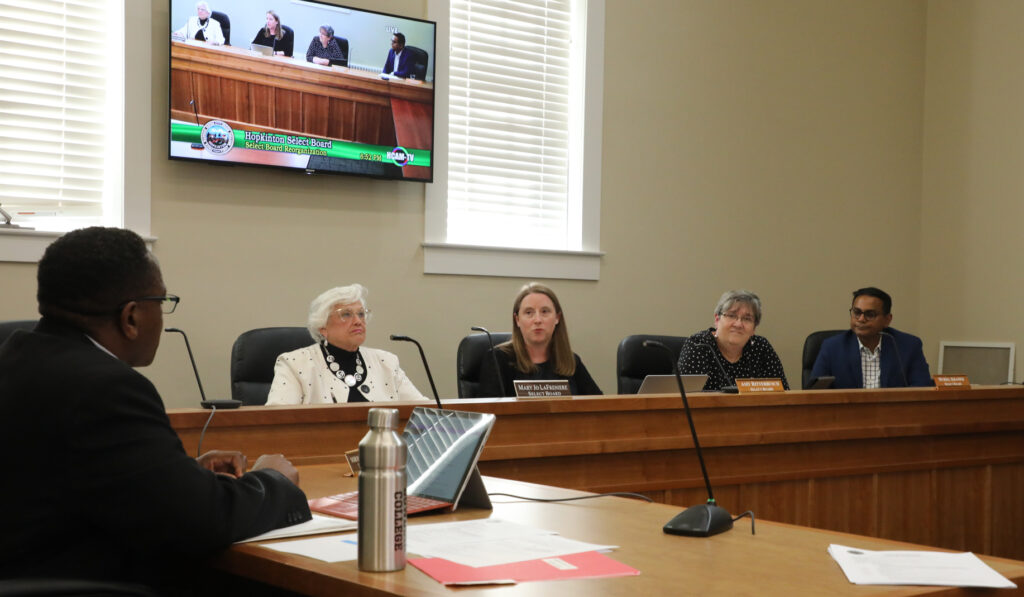 Amy Ritterbusch was unanimously elected chair of the Select Board at Tuesday’s meeting, with Mary Jo LaFreniere unanimously chosen as vice chair.

Ritterbusch was elected to the board in 2020. LaFreniere was reelected to serve a third term in Monday’s Town Election.

Tuesday’s meeting also was the first for Shahidul Mannan, who was elected Monday.

Travis Miller of Criterion Associates made a presentation to the board regarding a study of the public safety buildings — specifically the town’s two fire stations (the headquarters on Main Street and the substation on Wood Street).

Town Manager Norman Khumalo explained that the process is in the early stages. He said it would be ideal to identify a plan before next year’s Town Meeting, but it’s likely to take longer.

“We are continuing to evaluate options as the information becomes available,” Khumalo said. “So regularly we will continue coming back to the board to provide you input. And as we’re doing that, one of the issues we’re thinking about is when to bring this process out to the public.”

Erin Graziano, representing the Hopkinton Parent Teacher Organization (HPTO), appeared before the board to ask for an entertainment license for a carnival in the high school parking lot from June 23-26, run by Fiesta Shows.

The carnival, which raises funds for the HPTO, has been held in past years, although it was not held during the pandemic.

The license was approved, although concerns were raised about carnival workers smoking in front of residences across the street (smoking is not allowed on school grounds).

Khumalo said he planned to send out a survey to get residents’ opinions on Town Meeting. The board discussed the problem getting enough people to attend — this month’s meeting was halted multiple times due to the lack of a quorum. …

During his Town Manager Report, Khumalo indicated that the Main Street Corridor Project is two weeks ahead of schedule. …

The board accepted three resignations: John Morris from the Affordable Housing Trust Fund Board, Mark Hyman from the Board of Appeals, and Erica Lawrence from the Youth Commission.