Annual Town Meeting will be held at the Hopkinton High School Athletic Center, the Select Board decided at Tuesday’s meeting.

Town Meeting normally is held at the Hopkinton Middle School auditorium, but the Health Department recommended the field house, which is larger and allows for more room between people, and has better air flow.

“I’m all in favor of the larger space,” Select Board Chair Irfan Nasrullah said.

Town Meeting is scheduled for Monday, May 2, at 7 p.m.

The board also agreed to sign the Town Meeting warrant, took positions on a number of articles and reviewed draft motions.

Among the articles for which the board unanimously agreed to recommend approval are the fiscal year 2023 operating budget, a PFAS filtration system for Well 6, Fruit Street turf field replacement, and a tax increment finance (TIF) agreement with Lykan Bioscience.

The board also postponed establishing a position on land acquisition of the wooded area behind 71 Frankland Road, where Seaboard Solar is planning to build a solar array.

Those items will be brought up again at next Tuesday’s meeting. 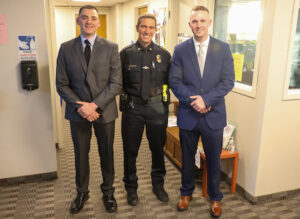 Two individuals who currently are in the Police Academy appeared before the board for interviews and were conditionally offered positions as officers.

Brennan Grimley, who hails from Grafton, graduated from Norwich University in 2020 with a degree in criminal justice. After serving as a military police officer with the U.S. Army Reserve, he returned to the area. Having served as a college intern with the Hopkinton Police Department, Grimley reached out to Chief Joseph Bennett when he heard there was a job opening.

Bennett said it was “truly a pleasure to work with Brennan” when he interned from 2017-20.

Saletnik grew up in Bellingham and went to Becker College, where he earned a bachelor’s degree in criminal justice. He interned with the Milford Police Department for two summers while in college. He also has five years of experience as a police dispatcher in Mendon and Medway.

“He knows the environment and the culture,” Bennett said.

The Select Board voted to conditionally offer both individuals positions as officers pending successful completion of their Police Academy training. 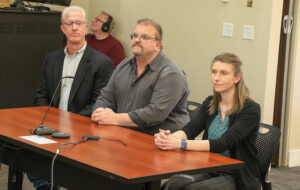 Board OK’s inspector of construction

The board unanimously approved the hiring of Nicole Bratsos as the town’s first inspector of construction, utilities and engineering.

“It’s been a long journey getting to this point, convincing the town that we absolutely needed to create this position to support the amazing work done by our volunteer team as well as by the DPW and Engineering Department,” Town Manager Norman Khumalo said.

Khumalo said Bratsos has a reputation as a hard worker known for “doing the difficult work” and is someone who is “committed to making sure that the team succeeds.” He added that she is calm under pressure, an especially important trait.

DPW Director John Westerling said Bratsos is about to earn her bachelor’s degree in water quality management, which will be particularly helpful considering the town’s recent problems with its water supply.

The board also unanimously approved the town manager’s appointment of Joyce Emery as the administrative manager for the Fire Department. Emery replaces Mary Carver, who recently retired after 25 years of service.

“The references told us that she’s an amazing team player, very professional, likable, excellent communication skills, is always one step ahead — and you absolutely need that when you ‘re working in the [Fire Department].”

The board addressed an issue raised by resident Amy Groves regarding traffic in the driveway leading to Hopkinton Middle School on election days. Groves said the overcrowding has become a safety issue.

Groves made it clear that this is not a politically motivated concern, but rather a safety issue with “bigger and bigger trucks and cars and flatbeds, horse trailers, gardening trailers, everything you can imagine, and every year it gets worse.”

Groves said the political parties in town traditionally have worked well together, but now there are “groups that are coming who are … representing a piece of maybe one political party or maybe representing an issue or maybe unenrolled, and they’re not really paying any attention to what a [party] chair says.”

Added Groves: “It’s been getting demonstrably worse every year.”

Select Board Member Brendan Tedstone noted the low voter turnout and the lack of a strong Republican presence in town and said he didn’t see a need for a change.

Added Khumalo: “There is something fascinating about the hustle and bustle around elections, especially here in Hopkinton, and it would be very challenging for the board to take any position that doesn’t impact that.”

The board decided not to take any action on the matter, although the members encouraged the police to manage the area to ensure emergency vehicles can pass.

Boston Athletic Association officials and town emergency personnel appeared before the board to provide an update and celebrate their partnership in putting on the Boston Marathon.

The race is returning to its usual wave start this year, after holding a rolling start in 2021.

By 7 a.m. all the roads leading into the center of town will be blocked. The roads will be reopened around 1 p.m., after the race participants have departed for Boston. …

The board approved a revised $103 million budget due to a handful of changes, including a $50,000 increase in the DPW gasoline/diesel fuels budget due to a spike in fuel prices. …

The board approved the town manager to execute solar site control agreements with Solect Energy Development relating to photovoltaic projects at Marathon School, Hopkins School, the middle school and the high school.