Select Board roundup: Town ‘moving in the right direction’ vs. COVID; Miller sworn in as fire chief

Health Director Shaun McAuliffe, during his update at Tuesday’s Select Board meeting, said the next few days will be telling, as people return to work and school after Labor Day weekend.

McAuliffe said the town has had 93 COVID cases since Aug. 1. Approximately 85 percent of those cases are believed to have resulted from the delta variant, he indicated, with 45 of those breakthrough cases (those who are fully vaccinated), 22 of those cases from children who are too young to be vaccinated, and 26 who are unvaccinated.

He added that Hopkinton is averaging 2.45 cases per day, “which is pretty good compared to other communities of our size.” The town’s positivity rate is 1.66 percent and dropping, he said, and his goal is for it to be below 1.

“We’re definitely moving in the right direction,” he said. “A lot of that has to do with our high vaccination rates and just the residents in general are responsive to the messaging, the communication that we’re putting out.”

He added that the town’s minority population also is at 95 percent “across the board.”

“Among communities with a population over 10,000 we have one of the top vaccination rates in the state,” he said. “So it’s something for us to be proud of. It certainly makes my job a little easier.”

He advised residents to continue to be vigilant, minimizing travel and large gatherings, while wearing face coverings, practicing social distancing and demonstrating proper hygiene. “We need to reduce our exposure to high-risk environments,” he said.

He suggested parents who are shopping around for activities for their children “do so with COVID in mind,” asking programs what protocols they have and then making sure they follow through.

“At the end of the day, let their dollars do the talking,” he said. 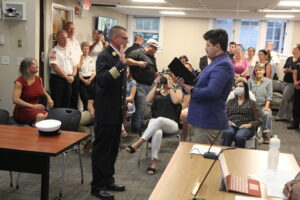 Miller sworn in as chief

Contract negotiations were completed with Bill Miller, who was sworn in as fire chief by Town Clerk Connor Degan while firefighters from Hopkinton and other departments looked on.

Miller, in brief remarks, thanked his family and fellow firefighters and called it “a great, great honor” to take over for former Chief Steve Slaman.

Miller filed paperwork to indicate he will do his part to avoid any conflicts of interest regarding his brother-in-law, who is a member of the department as well. 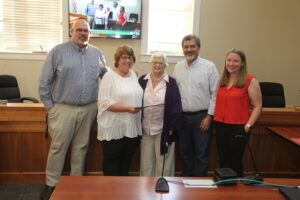 Kathy LaFlash (second from left) poses with Select Board members (from left) Brendan Tedstone, Mary Jo LaFreniere, Irfan Nasrullah and Amy Ritterbusch after being recognized for her long service to the town. PHOTO/JOHN CARDILLO

Kathy LaFlash was recognized by the board for her 26 years of service on the Personnel Committee.

“You have done a wonderful job and have been very dedicated to the town,” Mary Jo LaFreniere said.

“Kathy has been awesome at everything she does,” added Brendan Tedstone.

Town Manager Norman Khumalo said, “Our employee experience as of now would not be what it is [without LaFlash]. It’s positive, it is forward-looking, it’s something that we all wake up in the morning, thinking, ‘Hey, we’re going to Hopkinton to serve the community.’ All of that would not have been possible without your tireless effort as a member of the Personnel Committee.”

LaFlash noted that her mother was on the Select Board when she was appointed in 1996, and the town’s Human Resources Department looked very different.

“I was appointed to the board in 1996, and it was a part-time HR department at the time,” she said. “We were just developing; we had a part-time HR director and no paid employees. So, I’m very proud of the department, the work that everyone has done collectively, the expertise that we have as a group, as a committee, what we’ve been able to do. It makes me feel good to be able to step back if there’s somebody else that wants to be part of the committee and get them an opportunity to do it, and feel proud that we’ve done a lot for the town.”

The Select Board voted on a number of appointments. Alex Danahy was reappointed to a term on the Marathon Committee. Also appointed to the Marathon Committee as representative of their respective departments were Joseph Bennett and John Porter (Police Department), Bill Miller (Fire Department), Mike Mansir (DPW), Tim Persson (schools) and Liisa Jackson (Parks & Recreation Commission).

Nancy Drawe was appointed to the Housing Authority.

Shannon Casey was approved as a public safety dispatcher after working part-time for the past few months.

The board voted to support the town manager’s recommendation to create a new staff position for an engineering inspector, which will be funded from the existing budget.

The board accepted the resignation of Michelle Heeney from the Cultural Council. 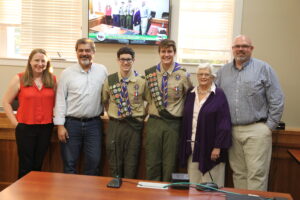 Eagle Scouts (and brothers) Ryan D’Alleva (left) and Daniel D’Alleva pose with the Select Board after being honored for their accomplishments. PHOTO/JOHN CARDILLO

The board voted to accept a $300 gift to the Ambulance Fund from The Whitehall Learning Group in memory of Lawrence Tedstone, Kristin Webb and George Jongeling.

The Police Department’s Hopkinton Night Out event, scheduled for Thursday night at the Town Common, was postponed due to the forecast for heavy rains that day. No immediate makeup date was announced.