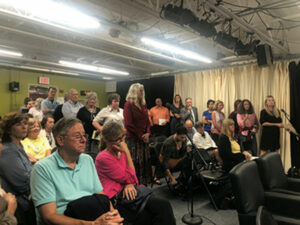 Audience members line up to speak at the hearing.
PHOTO/NANCY CAVANAUGH

At a Sept. 11 public hearing, the Board of Selectmen voted 5-0 to recommend against the town issuing a kennel license to Greyhound Friends, Inc.

The application for the kennel license followed legal and regulatory battles the shelter has faced since the Massachusetts Department of Agricultural Resources issued a cease and desist order in January 2017, preventing them from taking additional dogs from out of state.  The town of Hopkinton subsequently suspended their kennel license, forcing them to transfer dogs to other shelters.  The measure came after months of turmoil with Greyhound Friends Founder Louise Coleman resigning from the Greyhound Friends’ Board of Directors and taking a leave of absence as executive director in March 2017, before being fired a few months later.

The Sept. 11 hearing, which lasted over two hours, included witnesses both for and against Greyhound Friends, dozens of members of the public who wanted to speak on each side of the issue, and an audience so packed that the Hopkinton Fire Department had to manage the number of people allowed in the room at one time.

While some of the selectmen indicated they might support a future kennel license application if the entire Greyhound Friends Board of Directors was replaced, BOS Chair Claire Wright said, “Enough is enough.  I cannot support this organization in this town.”

Greyhound Friends Attorney Elizabeth Reinhardt opened the hearing’s testimony with a legal update of the shelter, explaining that the Cease and Desist order issued by the Massachusetts Department of Agricultural Resources that effectively prohibited the shelter from accepting out of state dogs in January 2017 was still in effect.

“The dogs that Greyhound Friends accepts are essentially refugees, generally rendered homeless…they sometimes come to the shelter with unknown medical and emotional needs.  Allegations of mistreatment have been swirling on social media,” she said in defending the organization. “Greyhound Friends adamantly denies any dog was mistreated in its care.”

Police Lieutenant Joseph Bennett and a team that included the building inspector, two fire prevention officers and the health director, had been charged with conducting a thorough and impartial inspection of Greyhound Friends.  Bennett inspected the shelter with his team the week prior to the hearing.  As of Sept. 6, he noted that there was no air conditioning and no hot water available for cleaning.  He cited additional issues including an oil burner and hot water system not working, problematic record keeping, concerns with sterilization and cleaning procedures, and many cages with inadequate space for the size of the dogs.

Bennett summarized his findings by saying, “The facility is not presently capable of providing a humane and sanitary environment…when the kennel has addressed the identified concerns, a re-inspection will be conducted with the recommended kennel capacity of the existing configuration at 10 dogs.”

President-elect of Greyhound Friends, Caryn-Amy Rose, advocated for the issuance of a license.  She stated, “Its true Greyhound Friends began to overtax its resources in the years leading up to 2017, but by dismantling a key national and international rescue organization, we’ve lost sight of the problem we’re trying to solve.”

After listening to the testimony and public comment, Selectman John Coutinho said, “[The problems at Greyhound Friends] happened under a board’s watch.  When stuff happens in town, it’s under [the Board of Selectmen’s] watch and we take heat for it.  For me, unless there’s a full change of the people that were on the Bboard when all of this went down, I cannot see how it can go forward.  Hearing the comment that [the dogs] are better off then where they came from isn’t good enough.”