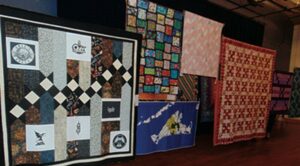 From across the room, Karen Swiech’s six-by-six-foot quilt shows the black-and-white image of a happy couple – her parents – on their wedding day six decades earlier. But look closer, and you’ll see more than 5,000 faded photos depicting her family’s history in the 60 years since her parents’ wedding, with more than 1,000 of them rendered in full color on the back of the quilt.

“My parents were very touched,” said Swiech, who gave them the quilt as an anniversary gift. “They love looking at all the photos and figuring out who everybody is. And the best part is that you can spill red wine on this and nobody can tell.”

The quilt, accompanied by a matching pillow, was just one of more than 70 quilted labors of love on display at the Hopkinton Center for the Arts Sept. 15 and 16 for the Marathon Quilters Guild’s “Common Threads” exhibit. Many, like Swiech, were inspired by special people, events and memories.

Organizer Cathleen Dinsmore said that the show’s theme was timely.

“People have become so disconnected and they don’t talk to one another,” she said.

While many quilts showcased traditional quilters’ patterns, others showed designs that reinforced that connection, as Swiech did, through images that were special to the quilters and their loved ones.

Dinsmore had several quilts on display, including one featuring Ozzy Osborne and other heavy metal themes — a gift for her son Liam Palacios, 19.

“He saw Ozzy in concert recently so we went online and pulled off images of Ozzy and Liam’s other favorite bands,” she said.

The quilt also depicted the music and lyrics to one of Liam’s favorite childhood songs, entitled “This Little Light of Mine.”

Hopkinton quilter Janet Roberts made a Christmas tree quilt, complete with working white mini-lights, so her son Kevin could have a tree in his college dorm room. She also won recognition for three small quilted dragons she made for her husband and two sons, complete with their own eggs that zipped up.

Other quilts also paid homage to popular culture. Hopkinton’s Kerry Creswell marshaled a group of 20 fellow quilters to create “Mischief Managed,” a breathtaking homage to the Harry Potter books, featuring owls, potion bottles, maps, a scary snake and other images that fans will remember. Another was a tribute to the beloved children’s book by Eric Carle, “The Very Hungry Caterpillar,” by Holliston quilter Becky McDonald.

Some quilters depicted special places. Lynn Marquedant of Hopkinton featured a map of Martha’s Vineyard and the Elizabeth Islands on her quilt. Jeanne Bertschmann, who had several quilts on display, created quilted pillows featuring Cape Cod.

A number of quilts paid homage to a single color family, including Bertschmann’s “Labyrinth,” a primarily blue quilt whose pieces were arranged to look three-dimensional. Colleen Manning Barnes had three color-themed quilts:  “Horizontal #1 in Purple,” “Horizontal #2 in Blue,” and “3 Dudes in Brown.” Franklin quilter Linda Grant welcomed autumn with her “Fall Pinwheels” quilt. And McDonald featured a riot of colors in “Big Blooms,” a giant bed quilt inspired by festive Mexican colors.

For more information on the quilters’ group, visit marathonquilters.com. 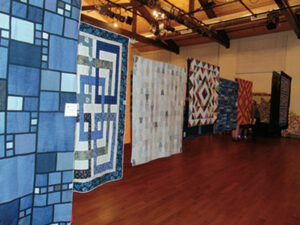