Hoagland retires after 20 years of helping to guide students 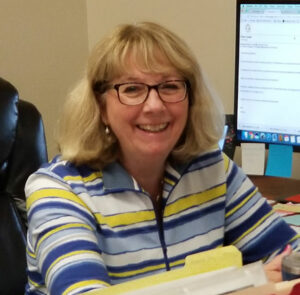 The first time Nadine Hoagland walked into the Guidance Office, it was as a volunteer. The guidance director, Lee Greco, had mentioned the need for help with filing and all and did Hoagland know anyone who would be interested. She had her bachelor’s degree and had been taking paralegal courses, but wasn’t thrilled with the idea of going into Boston to work, so she suggested herself. Greco agreed and that began a long relationship. At that point in time, the office was in the high school, today’s middle school.

“It has been a fun job, never knowing what you are walking into. I love the kids and it never got boring,” she said.

This fall, Hoagland will not be in the schools. Rather, she will be starting the next chapter of her life as she enjoys retirement in Dennis.

Her work in the Hopkinton schools took on many dimensions, she said, from registering kids to the district, withdrawing kids, and endless questions from both students and parents, and assisting students with scholarships.

“Unfortunately, not enough student take full advantage of the scholarships available. What was really tough was setting up scholarships in memory of a student. But I developed a really close relationship with those families,” Hoagland recalled.

Hoagland talked about the first week when the department moved into the new high school. “There was a pile of brand new, state-of-the-art televisions stacked in the corner, but none of them worked,” she said. “So all of us were crowded around this little tv in the front office, watching the events.”

The reason why the staff was watching television that morning? It was the same that millions of others around were — it was Sept. 11, 2001. That day, of course, was one of the worst days of terrorism in American history when al-Qaeda militants hijacked four airplanes and then crashed them in suicide attacks into the World Trade towers in New York City, the Pentagon Building in Virginia and a field in Pennsylvania.

The job expanded when Hoagland went from 10 months to 12 months. She scheduled college visits, collected transcripts for juniors and seniors and coordinated the AP classes.

“So many take AP classes now,” she said.

Every year there are more things to do, but not more people. Her co-worker, Connie O’Loughlin, will now go to 12 months, but there will only be part-time help for her.

One of the increases in the job is dealing with “school shoppers.” This had been because of the school rankings. But the rules have now changed so that those wanting to visit the school and meet with a counselor must own property in town.

“This year was the first year that the superintendent’s office will take pre-registrations on line. The process is time consuming so that will be a help. And as the year goes by, fewer people withdraw. I registered over 50 people this past school year,” Hoagland said.

Hoagland said there are 23 foreign students this year; most are paying tuition. Many are from Thailand, Italy, China, Brazil and Vietnam. There is one true exchange student (J-1) from Spain.

“I never would have stayed here for 20 years if I didn’t like the job and the people,” she noted.

“Especially the students who would come in at lunchtime and after classes and hang out.”