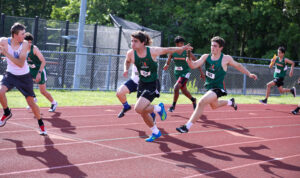 Like all high school sports teams, Hopkinton High School boys outdoor track and field has had to stay flexible and roll with the many changes imposed by the COVID-19 pandemic. But, after the team’s second mask-free practice of the year, coach Brian Prescott said the large senior class has helped the Hillers put together a successful spring.

It’s part of the reason he named a whopping seven captains for this year’s team.

“Normally we would not have that many, but six of them were captains indoors and we named an honorary captain because he has been doing everything for us,” Prescott said.

The seventh captain, Peter Burdulis, has helped out with the middle school program and is constantly among the first to arrive and last to leave practice, constantly asking questions and striving to get better.

“Kids like that really help a program,” Prescott said. ‘When you see someone working hard and they are given a leadership position, the younger guys see that.”

Added Prescott: “If you have seven guys like that, it’s hard for us to go wrong.”

Several of the Hillers’ senior captains have been big-time point scorers for the team, and some are looking to continue their track and field careers in college.

Ethan Champlin is one such senior, headed to UMass as a multi-event athlete. He is one of the top 100-meter runners in the Tri-Valley League this spring and also has stood out in the high jump and the long jump, falling seamlessly into track after finishing the unusual spring football season.

“He works incredibly hard and he is super supportive and a very positive teammate,” Prescott said. “He is the all-around package, a really good athlete and a really good teammate.”

Aidan Morin is another vocal leader who is a top discus thrower and shot putter for the Hillers. Aidan Rowell is eyeing the school record in the 400 and has been the anchor for the 4×400 relay team. Prescott said he sees himself in Rowell, a vocal athlete who serves as a de facto coach for some of the younger members of the team.

Harrison Prucher is similar, Prescott said. He set the indoor record for the high hurdles and has been standing out in the longer outdoor hurdle events while he helps a strong contingent of his teammates.

“We probably have the best collection of young hurdlers in the league, and in many ways I attribute that to Harrison because he is helping to coach them,” Prescott said. “He does things so diligently, like a machine. Without him, I feel like we wouldn’t have that anchor or that foundation.”

“He has been one of the faces of our program for the past four years,” Prescott said. “He is such a charismatic guy, everyone in the school knows him. If our distance crew ends up like him, that will be a resounding success.”

Tommy Bernardin is the team’s top high jumper, another technical event that has benefited from his experience and willingness to impart that knowledge to those coming up through the ranks.

The seven captains have been essential to Prescott’s goals for this shortened season, which he said is all about reestablishing the expectations set within the program after missing out on 2020.

“We wanted to get the program back on track, get the seniors to finish on a positive note, and get some freshmen invested so they want to come back next year,” Prescott said. “If we can make this feel like a normal track season, then next year we can propel forward.”