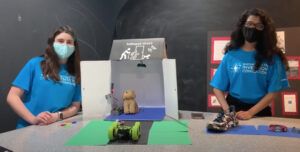 Even when watched by the most attentive caregivers, children, pets and people with neurodivergent disabilities can wander.

Rylee Blair, a 15-year-old Hopkinton High School freshman, experienced that firsthand. A neighborhood dog got loose from its home and was struck and killed by its devastated caretaker, who didn’t realize the pet was outside.

Determined to prevent another such tragedy, she and friend Jahnavi Prudhivi, a 17-year-old HHS junior, joined forces to create Infrared-Alert.

This system uses a transmitter placed on the individual or pet that can send a signal to a receiver when the person or pet wanders past a certain location.

This triggers a sign that can block a driveway and alert people to a potential hazard.

“Safety is the number one priority” for caretakers in these situations, Blair said.

This invention earned the two students the honor of being the highest-scoring team in the High School Division in the Massachusetts Invention Convention sponsored by the Lemelson-MIT program. The program promotes invention and works to inspire young people to pursue creative lives and careers through invention.

The competition was held virtually in April. They now go on to a virtual national convention in June.

Their invention took a lot of time, research, and trial and error to smooth out mistakes made during the learning process and determine what worked and what didn’t, Prudhivi said.

The students had known each other for a long time, but working together on the invention, “our bond has definitely strengthened,” Prudhivi said.

Six judges assessed the inventions on a variety of aspects, including a video made about their invention, a journal they kept about the creation process and a virtual display board they put together to explain the project.

The girls’ work began at the Hopkinton High School level, where they entered a similar invention competition. They did so well there that they were encouraged to enter the state competition.

The project faced one immediate challenge: The students couldn’t spend more than $50 on their inventions. That meant that they could only create a prototype and not a full-size model.

But they continue to work on a full-size version of Infrared-Alert, with hopes of eventually getting a patent and putting their invention on the market.

She noted that the students identified a problem, developed a potential solution and then created a prototype, tweaking it along the way to overcome obstacles and build the final invention.

The skills they develop through this process will give them a heads-up on their futures, Griffiths said. “I love that they get this kind of education,” she said.

These lessons, she added, will “stay with them the rest of their lives.”

Blair said the long hours ultimately were rewarding. “We are so happy with what came out of this,” she said.

The girls plan to watch the virtual national competition June 24, along with classmates who also participated in the competition. “I’m so thrilled you’re going to watch it together as a party,” Griffiths told the girls. “I’m going to be cheering for you so hard.”

Other Hopkinton students who qualified for the national competition are: