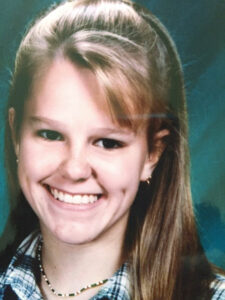 The softball field at Hopkinton High School is named for Lauren Anderson, who died in 1994 in a horseback riding accident when she was a teenager.

Those who knew Lauren Anderson said she had a certain “sparkle” about her. It was an energy that made her so memorable to her friends, Hopkinton High School classmates and teammates that dozens of them have jumped in to spread the word and raise money for a project seeking to spruce up a field bearing her name on the 25th anniversary of her passing.

“I was flabbergasted,” said Riki Anderson Rubin, Lauren’s mother. “The fact that it has been 25 years and so many people are coming forward and remembering her is wonderful.”

Rubin admitted the outpouring caught her by surprise.

“She was my daughter and she was wonderful,” Rubin said. “I just didn’t know everyone else felt the same way.”

Anderson died in 1994 in a horseback riding accident. An HHS student at the time, she was active in equestrian, skiing, softball and cheerleading, as well as being a loving daughter, sister and friend. Her family lived in a tight-knit neighborhood in town, and Rubin remembers Kathy Kilduff walking over to her home that night.

“She said, ‘We lost a sparkle,’ and it just seems to be to be perfect for her, a perfect name, because that’s what she was,” Rubin said. “She got along with everybody, even her sisters, and she just sparkled.”

The word stuck. It’s engraved on Anderson’s headstone and on the Lauren Anderson Memorial Scholarship that Rubin gives out to a Hopkinton student each year.

The scoreboard at Field 6 behind the high school, a softball field, was named in Anderson’s memory. Over the years, however, the quality and upkeep of the field fell behind its neighbors at the school. That’s what led that same group of former neighbors, most of whom have since moved out of Hopkinton, to take action.

“Our two goals are to honor Lauren on the 25th anniversary of her passing and to upgrade the field to match the quality of the other athletic fields at HHS,” Kilduff said. “Softball was a sport she loved, so we feel it’s a wonderful way to honor her and do something within the community.”

So Kilduff and several others took to social media and spread the word to local residents and people who were in Anderson’s life back in 1994. The response was immediate and, Kilduff said, “overwhelming.” The project raised $8,000 in its first week.

The fundraising blitz will wrap up by mid-September, Kilduff said, and the goal is $40,000. By the time it’s over, the plan is for the field bearing Anderson’s name to have a new scoreboard, bleachers, dugouts, landscaping around the field and a warning track. Supporters can donate through an online PayPal account, through Facebook and by checks payable to the Hopkinton Boosters, who are helping collect money.

Marie Eldridge, another former neighbor who is helping to organize the project, said people have stepped forward to volunteer their labor and time in addition to supporting the project financially.

“Everybody grabbed a job and off we went,” Eldridge said. “The response has been amazing for such a short amount of time. A lot of her peers are getting on the bandwagon, either through making a donation or offering to do something.”

Rubin admitted it was difficult for her to go to the field and see the scoreboard, in part because of the memory of her daughter but also because the field itself was not up to snuff compared to the others. She said it was difficult for her to follow up on improving the field herself, but she is grateful for the efforts of that same dedicated group of neighbors who stepped up 25 years ago as Rubin dealt with the pain of losing her daughter, and who are still determined to make sure Lauren’s sparkle never dies.

“I can’t believe it’s been 25 years,” Rubin said. “She was just a girl going about the business of her life and enjoying every minute of it. She was just a wonderful kid.”