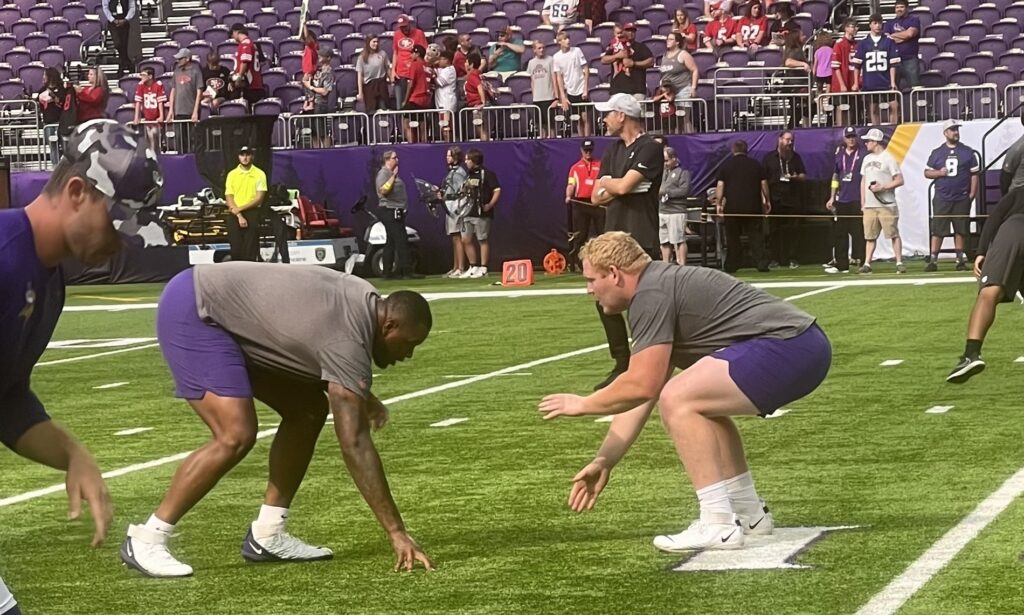 Josh Sokol (right) warms up before a preseason game in Minneapolis. PHOTO/MARY SOKOL

Hopkinton High School graduate Josh Sokol is going to be hanging around the Twin Cities a little longer after landing a spot on the Minnesota Vikings’ practice squad following preseason camp.

One of the last players to be cut from the active roster, Sokol, 24, will continue his professional football career by helping the team get ready for each week’s game.

“Obviously I wish I made the active roster, but this is a good stepping stone for me,” Sokol said. “Hopefully they will develop me going into next year, if not this year.”

Players on NFL teams’ practice squads can be signed to the regular roster at any time during the season. Sokol signed with the Vikings after a stellar career at Sacred Heart University. The 6-foot-3, 290-pound center said the jump from a small college to the NFL has been a challenge.

“We are going up against the starters on defense and it’s competitive, but I’m getting better and that’s all I can do right now,” he said. “It’s more intense as far as the meetings go and the expectations, the plays, and managing the playbook, learning defenses, making calls at the line of scrimmage. It’s just much more complex.”

Sokol took part in the team’s training camp and saw action in preseason games, which he said was a great experience.

Through the whirlwind of the preseason, Sokol said he did not have much time to settle into his new surroundings in the Midwest. Now that he knows he will be staying with the franchise, he said he has been reaching out to real estate agents and trying to find a place to live. He is also spending time poring over the Vikings’ playbook.

The practice squad, which can consist of up to 16 players, primarily consists of players with little to no NFL game experience who show enough promise for the team to keep them around while they develop. They practice with the active players, often as part of the scout team: players who run the upcoming opponent’s plays in practice to prepare for the matchup. First-year practice players typically earn about $11,500 per week.

Sokol came to the NFL from a relatively small school, but he said that doesn’t matter in an environment now where he has to prove himself worthy every single day.

He also said the reality of where he is playing has not fully set in yet, but he said it started to a bit during a recent trip back to Hopkinton before the start of the season.

“Hanging out with my friends and my parents, they remind me where I am,” Sokol said. “Other than that, it’s pretty much normal, we’re just playing football.”

Sokol went home to see his family and pack up some winter clothes before the temperatures drop in Minnesota. He didn’t have much time to spend in Hopkinton, with the season opener against the Green Bay Packers looming on Sept. 11. He also hasn’t had much time to get to know his new city, although he said he did go to the Minnesota State Fair.

“That was cool, but other than that I don’t know much about the area,” Sokol said. “I’m just trying to take it all in as I go.”