Hopkinton product a captain in senior season for Pioneers 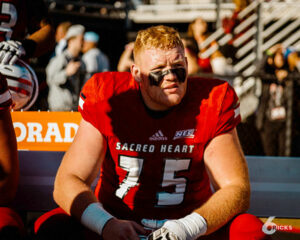 Hopkinton’s Josh Sokol is a senior captain on the football team at Sacred Heart.

Josh Sokol remembers being told he would not last a semester at Sacred Heart university, but the Hopkinton High School graduate has spent the past four years proving the doubters wrong and is an anchor of the Pioneers offensive line this fall.

“It’s been a long road,” Sokol said. “Coming in as a freshman I didn’t know what to expect. I’ve been working my way up through the ranks, gotten better, learned the playbook, made some great friends. It’s been a long journey and I’ve come a long way.”

Sokol was a two-time Tri-Valley League All-Star with the Hillers, but he said wrestling was his primary athletic focus in high school. He worked his way through a shoulder injury and took a redshirt year after arriving at Sacred Heart in Fairfield, Connecticut. Last year, as a junior, he became the team’s starting center. This season, he is again starting and was voted captain by his teammates.

The captaincy is something that eluded him in high school. He said he was labeled a “dirty” or “selfish” player, but he’s channeled that intensity and competitiveness into the edge needed to thrive at the college level.

“You get told one thing in high school but, at this level, that’s what they want,” Sokol said. “I’ve also tried to work on my leadership. I’m a captain and I’m expected to set an example all the time.”

The Pioneers’ mantra is, “The logo never comes off.”

“When you’re with family or friends, you have to know the bigger picture is what’s best for our team,” he said.

Sokol landed on the radar of Sacred Heart head coach Mark Nofri more than four years ago. The coach calls Sokol “a football junkie” who spends hours watching game film or getting stronger in the weight room.

“I’m most impressed by his work ethic,” Nofri said. “The fact that he is never satisfied. He always wants to get better.”

Playing perhaps the most cerebral position on the offensive line presented a two-front challenge that Sokol has been able to navigate. He had to put on some muscle when he first arrived at Sacred Heart and now is listed at 290 pounds on a 6-foot-3 frame. Sokol also is responsible for communicating with the rest of the offensive line, calling out assignments on the fly and being ready to change plays when needed.

They are all tasks Nofri said Sokol has handled well, so much so that he is excited about the prospect of Sokol returning next fall for a fifth season. The Hopkinton native has one year of eligibility left and said he is considering pursuing his master’s degree in criminal justice.

Throughout the process that has made Sokol a key cog for a Division 1 college football team, he said his family and friends have been instrumental. His parents, Mark and Mary, have never missed a home game, even when he wasn’t playing.

“They’ve provided for me my whole life,” he said.

His grandmother, Eleanor Brown, and neighbor, Bob McGuire, also have been in his corner, Sokol said. Meanwhile, younger brothers Jacob and Justin are his biggest fans and seem to have inherited his work ethic.

“They never miss a game,” Sokol said. “They always want to work out with me and they are always there trying to get better themselves.”

Although he has an eye on the future and a decision about grad school, Sokol’s immediate focus is on a strong finish to the season for the Pioneers. But he also can’t help but reflect on his journey.

“I guess I proved a lot of people wrong,” he said.