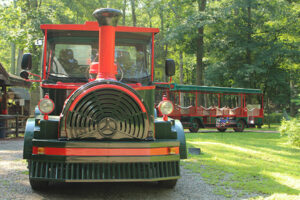 Visitors may enjoy a ride on the new state-of-the art train through the Elk Habitat at Southwick’s Zoo.

Visitors at Southwick’s Zoo in Mendon can typically expect to hearing the roar of the lions, the screeching of birds, and the hissing of snakes. However, now patrons are hearing the whistles of a new train echoing throughout part of the grounds. The zoo’s owners purchased two new locomotives in July after realizing their longtime Woodland Express Train didn’t have much chug left in the old choo-choo.

“Families are really enjoying it,” said Southwick’s co-owner Betsey Brewer. “It was time to retire our old train and upgrade to this one.”

For an extra fee, visitors may board the new train to take a relaxing 15-minute ride through the zoo’s 50-acre elk habitat while also seeing other native wildlife, including geese, wild turkeys, and turtles.

“We actually don’t own the wildlife; they migrate here,” Brewer explained.

The two new GOPO trains, purchased out of Naples, Florida, are state-of-the-art with LED lighting all around, three coaches with handicapped accessibility, an engine car, articulate steering, and larger seating capacity. Bob Desjardins and Gary Whiting are the train conductors who will be driving visitors throughout the habitat.

GOPO Trains was the brainchild of Luc Goemaere, who started the company in Belgium. After World War II, his grandfather had the idea to build tractors out of military vehicles that were left in his homeland after the war. Because the farming industry was flourishing at that time, the tractors were heavily sought after. Ultimately, Goemaere and his father took over the business. However, in the 1980s, the farming industry began to decline, so Goemaere began producing trackless trains for tourist transportation, which proved to be very successful. Eventually, the business moved to Florida where Goemaere now lives and continues to manufacture the trains.

The new trains are part of an effort to keep Southwick’s Zoo open past its end of October closing date. Because the animals live there year-round without visitors in the colder months, Brewer explained Southwick’s will be decorated with outdoor lights, serve hot chocolate, and visitors can take a train ride to view their favorite creatures as part of a themed Winter Wonderland. A jolly, bearded man dressed in red may even be there during the holiday season as part of the fun.

“Kids can ride right by the lions and tigers, see the yaks and camels, and more. It’s just a different way to experience the zoo,” Brewer said.

The Winter Wonderland is expected to run from mid-November through the New Year on Fridays, Saturdays and Sundays, weather permitting.

New attractions continue to be added to Southwick’s. Last year, a new rustic-style tavern, Gallifords, opened up on the property providing visitors a place to dine, and the Soaring Eagle Zipline and Skyfari offer visitors a fun ride over the zoo.