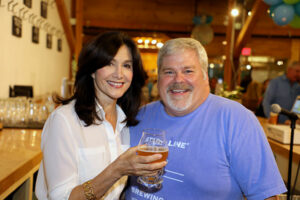 A fundraiser was held Sept. 5 at Start Line Brewing to support early detection and treatment of ovarian cancer. The event was held in memory of Meg Parduhn, a Hopkinton mother of four who passed away from ovarian cancer in 2018. Among those at the event were Hopkinton’s Marie Boyle (with microphone), a cancer survivor who has worked tirelessly to raise funds and awareness for the cause. The featured speaker was former longtime WBZ-TV arts and entertainment reporter Joyce Kulhawik, shown with Start Line Brewing owner Ted Twinney. Kulhawik also is a cancer survivor. Proceeds from the event went to the cancer-fighting organization Girly Girl PARTS as well as Dana-Farber Cancer Institute. 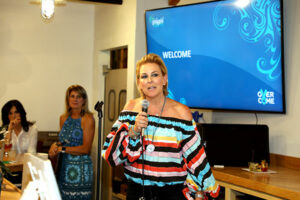