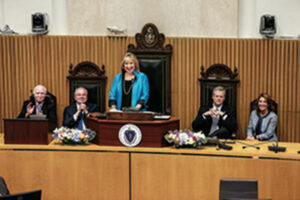 State Sen. Karen E. Spilka (D-Ashland) was elected to be the president of the Massachusetts State Senate by her Senate colleagues July 26. Spilka represents the Metrowest communities of Ashland, Framingham, Franklin, Holliston, Hopkinton and Medway, which comprise the 2nd Middlesex and Norfolk district.

“Serving in the Massachusetts Senate has been, and will continue to be, one of the greatest chapters in my life story,” Spilka said in a release from her office. “I pledge to uphold and maintain the integrity of the Senate, an institution I can honestly say I love with all of my heart.  I look forward to working with people from all over the state, to build on the strengths we bring from each region, and to tackle our challenges head on, so that Massachusetts will continue to be a leading light in our nation.”

Before being elected to the presidency, Spilka served as the chair of the Massachusetts Senate Committee on Ways & Means beginning in January 2015.  Prior to that, she served as the Senate Majority Whip (2013-2015), Assistant Majority Whip (2012-2013), chair of the Joint Committee on Economic Development and Emerging Technologies (2009-2012), and chair of the Joint Committee on Children, Families and Persons with Disabilities (2005-2009), a committee she helped originate.  She began her legislative career as a State Representative for the Seventh Middlesex district in 2001.

Spilka is a graduate of Northeastern Law School and holds a B.S. in social work from Cornell University. She has been married for over 20 years to Joel S. Loitherstein, an environmental engineer, and has one adult step-daughter and two adult sons — Heather, Scott and Jake — and two rescue dogs. 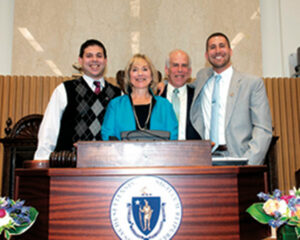