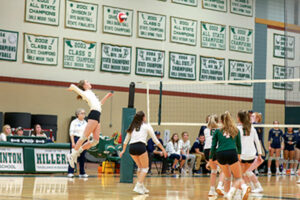 Hopkinton High School junior Cadyn Boyce keeps her eye on the ball as she prepares to strike it during the volleyball team’s 3-0 tournament victory over Shrewsbury on Nov. 4 at the HHS athletic center.
PHOTO/CHRISTINE STRICKLAND

The Hopkinton High School volleyball team completed an undefeated regular season at 18-0 and carried that momentum into the postseason, advancing to the Division 1 Central/West sectional championship match against top-seeded Needham on Nov. 9.

In their playoff opener on Nov. 4, the Hillers cruised to a 3-0 victory over Shrewsbury despite playing without senior captain and Tri-Valley League MVP Angie Grabmeier, who sat with an ankle injury.

It was the final home match, and the fans turned out in big numbers to support the Hillers.

“The atmosphere at our first playoff game was so exciting,” Grabmeier said. “The fans encouraged our team and made a huge difference in the result of the game. It was overall a great experience and we are hoping to continue this energy from the team and the school community throughout playoffs.”

Both HHS soccer teams finished with .500 records, good enough to qualify for the state tournament.

“We knew that they were going to be a good team, but we also knew that if we went to Fall River and played our style of play we would succeed,” Fargiano said. “Our team has developed into a team that prioritizes passing and ball movement, and when we do those things well we are difficult to beat.”

The boys’ season came to a heartbreaking end in the following match against Bishop Feehan. Steven Maffiore scored in the opening minute of the second half to put the Hillers up, but Feehan tied the score on a penalty kick with less than five minutes remaining. After two overtimes of scoreless soccer the game went to a penalty kick shootout, and Feehan prevailed in the 11th round. …

The girls finished 6-6-6 and were the 17th seed in the Division 2 South bracket. The Hillers headed to Cape Cod and knocked off 16th-seeded Nauset Regional High School on Nov. 2, winning via a shootout after the game was tied at 1 after regulation and overtime. Senior Ally Bird scored the lone goal for the Hillers, and junior goalie Kristin McCluskey came up with three saves in the shootout. In the next round the Hillers fell to top-seeded Old Rochester on Nov. 5 by a score of 3-1.

The HHS football team qualified for the playoffs but saw its hopes of an underdog run come to an end in the Division 4 South quarterfinals. The Hillers paid a visit to Plymouth South on Nov. 1 and had a tough go of it, dropping a 42-6 decision. …

The HHS field hockey team finished its season with a record of 5-8-5. Senior goalie Lizzy Gross was named a TVL All-Star.