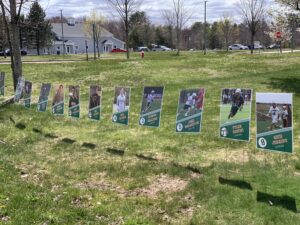 Lawn signs featuring HHS lacrosse seniors were set up in front of the high school in tribute to the players’ lost season. PHOTOS/JERRY SPAR 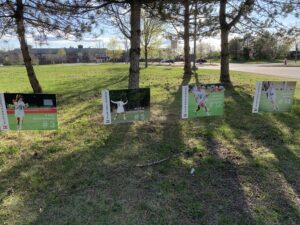 Normally the Hopkinton High School Athletic Department hosts a breakfast event for all seniors planning to play college sports. Due to the coronavirus pandemic, that was canceled. Instead, HHS athletic director Rich Cormier has been spotlighting the student-athletes on Twitter.

Additionally, Sean Walsh plans to play a year of prep hockey at the Tilton School.

Coach Dan Norton and the Hopkinton High School boys lacrosse team were named winners of the Eastern Massachusetts Lacrosse Officials Association (MLOA) Bill Miller Sportsmanship Award for 2019. They were to have received the award this season.

“Coach Norton and the Hopkinton program before, during and after games, whether they won or lost, displayed class, sportsmanship and respect to opponents and officials and are worthy recipients of the 2019 Bill Miller Sportsmanship Award,” the EMLOA stated in naming the Hillers as winners. …

← There’s a thought: Advice on how to get through pandemic Business Briefs: LakePharma works to combat COVID-19 →