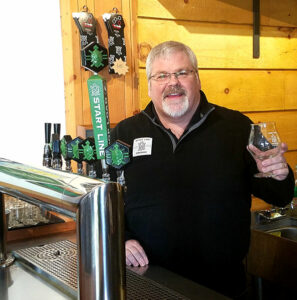 Start Line Brewing’s much-anticipated expansion project is nearing the finish line. Due to its popularity and success over the last three years, the Hayden Rowe Street brewery soon will be offering its patrons additional seating, live entertainment and more menu options, all in time for the summer season.

Twinney opened the business in November 2016 on the Fresh Water Farm property and jokes it is his “retirement business,” but says these days he’s working quite a bit more than the typical retiree, much to his delight.

“I’ve been a big fan of craft beers my whole life, so I’m really enjoying this,” he said.

Start Line offers both year-round and seasonal handcrafted beers that are made with hydroponic hops grown on the premises. Hydroponics is a science that grows plants in non-soil media and using nutrient-enriched water. Twinney said his two “excellent” brewers, Chris Locke and Patrick Ross, help create Start Line’s popular crafted beers. The Brewery also makes its own hop raw honey on site, and it’s sold there and used in some of the company’s beers.

Now more patrons will be able to enjoy the brewery’s offerings. A newly constructed beer garden and seasonal patio space as well as more seating in the tap room is being added. The new construction aims to give people a different way to experience the brewery. The three spaces will seat approximately 150 people altogether, with total occupancy around 200. Everything is expected to be completed sometime in June.

The menu is expanding to include sandwiches, salads, BBQ and even food truck-inspired tacos. Hydroponic produce is grown on site and used in some of the food offered.

Another change is the brewery’s hours. Recently Twinney received approval to extend business hours, which will be 11 a.m. to 9 p.m. on Wednesdays and Thursdays, 11 a.m. to 10 p.m. on Fridays and Saturdays, and 11 a.m. to 8:30 p.m. on Sundays. In addition, occasional live entertainment will be added to the mix.

The expansion measure has been in the works for some time. Twinney said he’s happy the end is in sight and his customers soon will be able to enjoy all the brewery’s new offerings. He said the time and effort that’s been put into the expansion endeavor reminds him of the brewery’s logo of a tortoise crossing the finish line.

“Slow and steady wins the race,” he said.

When Start Line first opened, the owner said he didn’t anticipate how quickly it would become a local favorite, and he is grateful to all who supported his business.

“We didn’t plan for the growth, but we’re delighted with it,” he said. “I feel super fortunate to be in Hopkinton and be supported by this great community.”