State Police: Arrest made in sideswiping of lieutenant on I-495 in Hopkinton 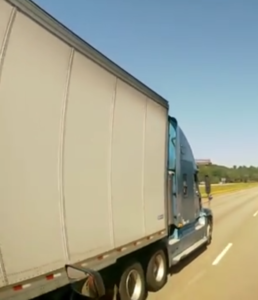 State Police announced last week they were searching for the driver of this truck following a sideswiping incident on I-495 in Hopkinton.

The Massachusetts State Police announced Saturday that an arrest had been made related to the hit-and-run incident that occurred on Interstate 495 northbound in Hopkinton last Wednesday.

According to a State Police press release, a lieutenant was walking in the breakdown lane after exiting his cruiser, set to assist another truck driver whose vehicle was stopped, when a tractor-trailer approached. The tractor-trailer was traveling in the breakdown lane and attempted to move to the right lane. The trailer made contact with the lieutenant and caused damage to the cruiser’s rear driver’s side door by pushing the lieutenant into it. The lieutenant was placed on injured leave after being treated at a hospital.

Following an investigation and the discovery of the truck, 40-year-old Perry Livingston was arrested at his home in New Haven, Connecticut, on Saturday.

The State Police had released dashcam photos and video of the truck and asked for the public’s help in identifying the driver.