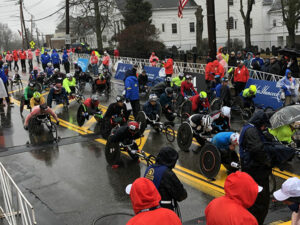 Wheelchair racers embark on the route to Boston at the start of last year’s race, which was held
in miserable weather conditions.
Photo/Hopkinton Marathon Committee

Linden, 35, rallied through cold, wet and windy conditions last year to become the first American woman runner to finish first at Boston since 1985. She considered dropping out early but pulled herself together and, in her sixth appearance at Boston, won in 2 hours, 39 minutes, 54 seconds.

“It was an absolute thrill, and life-long dream come true, to win the Boston Marathon,” Linden said in a recent interview with Forbes.com. “There are only so many years in a competitive career and I’m certainly in the later stages of mine, so it was rewarding to have such a career-defining moment on such an amazing stage.”

Among those looking to knock off Linden are Edna Kiplagat, Caroline Rotich and Sharon Cherop, three Kenyans who previously have won Boston.

Other men in the running include recent Boston champions Lelisa Desisa of Ethiopia, Kenyan Geoffrey Kirui, Ethiopian Lemi Berhanu and Kenyan Wesley Korir, who has become a crowd favorite as a dynamic guest at Hopkinton’s Elmwood School.

McFadden won her fifth women’s wheelchair title last year. She had won every year from 2013 through 2016. Switzerland’s Manuela Schar won at Boston in 2017 in a course-record 1:28:17. She has won every other World Marathon Major at least once and will challenge McFadden along with McFadden’s University of Illinois teammate Susannah Scaroni, and up-and-coming young Australian Madison De Rozario, who is coached by four-time Boston winner Louise Sauvage.

Hug, the course record-holder (1:18:04), won his fourth Boston title last year in the men’s wheelchair division and faces stiff competition, particularly from 10-time Boston winner Ernst Van Dyk of South Africa, who will be competing in his 20th Boston Marathon. Twenty-year-old American Daniel Romanchuk has burst onto the marathon scene in the past year and also could challenge.

Of particular local interest, Hopkinton native Lauren Philbrook will run in the elite women’s field. The 2005 HHS graduate, now a professor at Colgate University, ran a personal best of 2:38:00, competed in two U.S. Olympic Trials, and has qualified for next year’s trials as well. The elite men’s field includes Boston College graduate Tim Ritchie, who coaches cross country and track at UMass-Amherst.

Several other Boston Marathon champions from years past will run Boston as invited guests on a significant anniversary of their wins. Highlighting this group is 1984 Olympic gold medalist Joan Benoit Samuelson, who won Boston in 1979 and 1983. The 61-year-old has set a finishing goal of 3:15:35, which would be within 40 minutes of her first win 40 years ago.